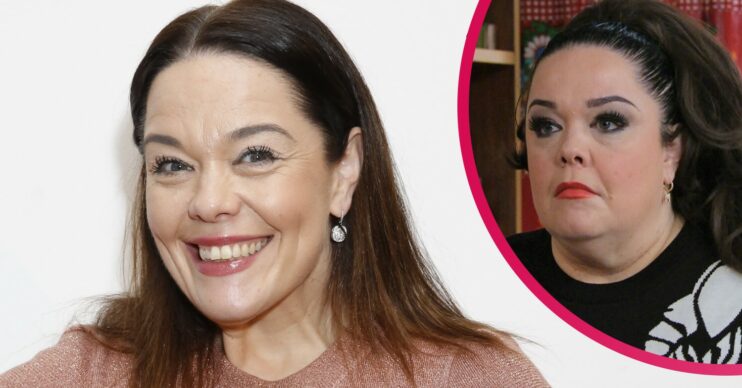 Emmerdale star Lisa Riley: How old is she? Is she married?

The Mandy Dingle actress returned to the soap in 2019

Emmerdale star Lisa Riley has played Mandy Dingle on and off for 27 years.

Larger-than-life Mandy is known for big hair, big lashes and lots of bold prints, but in real life Lisa is a far more sophisticated person!

Who is Lisa Riley? How old is she and is she married? Here’s all you need to know!

Who does Lisa Riley play in Emmerdale? When did she return?

Lisa plays Mandy Dingle, one of the huge Dingle clan.

Her dad was Zak’s brother, Caleb, and she even married her own cousin, Butch, once.

Mandy first appeared in Emmerdale in 1995, but left in 2000 after her marriage to Paddy Kirk broke down. She popped back in 2001 to try to win him back, but realised he was happily settled and left again.

She returned in 2019, for good this time, along with her stepson, Vinny.

Mandy had been in a relationship with Vinny’s father, Paul, but he was a gambling addict and had abandoned them. Mandy then raised Vinny as her own.

When she came to Emmerdale, Paul tracked them down and they reunited for a while. But he was still gambling and also began abusing Vinny.

Paul died on their wedding day after Jimmy King crashed into the barn where the wedding was taking place. Paul was trapped under a beam and died when the barn exploded.

Mandy went on to have an affair with Jimmy.

However, the PampaManda salon owner is currently single and focusing all her attention on Vinny and his new wife Liv.

Although, it has been hinted that she and Paddy may reunite…

How old is Lisa Riley?

She will turn 46 later this year.

Alter ego Mandy was born on March 1, 1977, which means she has just celebrated her 45th birthday.

In 2018 Lisa confirmed to her 184K Instagram followers that her partner Al had proposed.

Alongside a photo of the ring, she wrote: “Yes I can now confirm the rumours are true….I have got engaged…my soul mate and best mate and love of my life Al is the best thing to have ever happened to me..”

However, she confirmed at the time: “We have absolutely NO date set for ANY wedding day, just happy together…zero fuss, just confirmed our togetherness [sic].”

The couple have been together for eight years and in 2020 she told The Mirror that lockdown had brought them even closer together and she “wouldn’t rule out” a 2021 wedding.

But she did also state her big day would be tinged with sadness following the loss of her beloved mum, Cath, to cancer in 2012.

Cath was just 57 at the time and last year Lisa bravely admitted that she was still grieving the death of her mum – nine years after her passing.

Grief over her mum

The star spoke about her pain on ITV show Lorraine.

She also featured in a grief podcast to help others in similar situations.

Speaking to Lorraine Kelly, the actress shared: “I wanted to be unbelievably honest and tell the truth about what I go through daily.

“The uphill struggle I have massively with being judged. I have it on set with Emmerdale when I’m at work.

“Everyone knows me as having this fun, happy personality which is me. But the days I’m down, I find myself going, ‘It’s okay, it’s okay’ because I feel like I’m being judged.”

“People are like: ‘Come on Lise, it’s been nine years – you should be over it by now.’

“Well no – it’s as worse today as when Mum initially passed nine years ago in July,” she said.

Lisa has also previously spoken about her worries history will repeat itself.

Last year she told The Sun: “I think about my mum all the time, but it’s also made me determined to live my life to the fullest.

“The other day Bradley, who plays Vinny, asked about my mum and I told him, ‘Wow, what if history repeats itself and I only have 14 years left of me’.

“He welled up and told me not to say that, but that’s how I live my life – to the full.”

How did Lisa Riley lose weight?

Before her Emmerdale return Lisa lost an incredible 12 stone after decades of being overweight.

She inspired countless people to follow her in her health journey – and has even written a guide on how to lose weight.

“Once I accepted responsibility for my health, weight and lifestyle it made it easier to take control. You don’t have to have starter, main and pudding,” she told The Express in 2019.

“If you are doing that you are eating too much.”

She also said she exercised for 30 minutes per day and lifted weights.

But even after her inspiring effort to lose weight and get fitter, Lisa found the excess skin that remained was hampering her efforts to be healthy.

Speaking to The Sun on Sunday in 2020 she said: “I started thinking about my own health. People forget how gigantic I was.

“With the skin removal I lost twelve stone, one pound. The surgeon chopped off one stone, four pounds. Since then my weight has more or less stayed the same.”

She was paired with professional Robin Windsor after initially being given Artem Chigvintsev. He went on to partner Fern Britton instead.

She told Hello! in 2018 that she remembers her time on the show, in which she finished in fifth place, “with love”.

She added: “Robin is still my best friend for life and I’m so lucky that they brought us together.”

During her time away from Emmerdale she also starred in ITV dramas such as Fat Friends and Scott & Bailey, as well as roles in Waterloo Road and gritty BBC Three series Three Girls.

Since 1999 she has regularly appeared on Loose Women as both a panellist and guest.