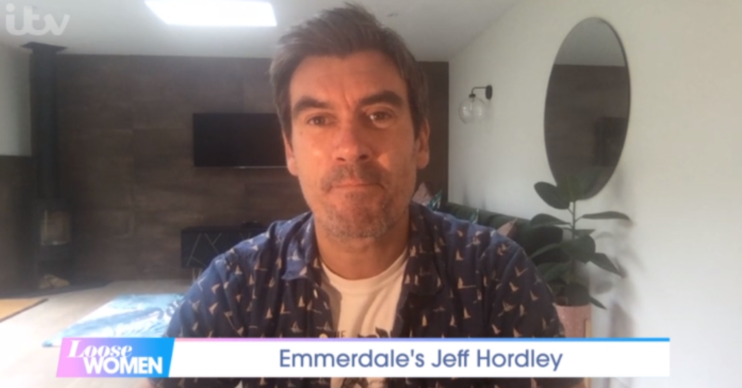 Jeff and Zoe have two children together

The actor, who is married to his co-star Zoe Henry, appeared on the show via video call to talk about his Emmerdale lockdown episode with Danny Miller, which airs tonight.

However, Jeff ended up revealing that he and Zoe adopted a puppy in lockdown.

When a picture popped up on screen of his new family member Jeff said: “That’s Ronald. Don’t be fooled by that cuteness because he’s got quite a character on him. But he’s kept us busy and he’s been a great focus for us all as a family.”

Whilst the family have another adorable dog called Rita, who is nine, Jeff revealed his son Stan didn’t get to remember Rita’s puppy years, as he is only 12.

Jeff added: “We’ve got another dog called Rita who’s a cockapoo and she’s nine and Stan said the other day, Stan’s 12, he kind of said ‘you know I don’t remember Rita being a puppy’ so he’s getting to relive, get the full experience of having a young dog again which is great.”

Jeff revealed the new pup is also a cockapoo and joked: “He’s got bigger eyebrows than me, which is saying something!”

Welcoming puppies to the family

Jeff isn’t the only Emmerdale star to get a puppy in lockdown.

His co-star Danny Miller, who plays his nephew Aaron, also got a dog, who he named Gini.

Jeff and Danny back on screens

Both Jeff and Danny will be back on screens tonight for Cain and Aaron’s lockdown episode.

When Cain sees Aaron has received a letter from prison, he hides it, fearing his nephew will fall back into despair over his ex-husband Robert.

Meanwhile, Cain struggles to open up about how he’s feeling with everything going on with Moira.

Cain and Aaron’s Emmerdale lockdown episodes will air tonight at 7pm on ITV.

Have you got any pets? Leave us a comment on our Facebook page @EntertainmentDailyFix and let us know what you think of this story.