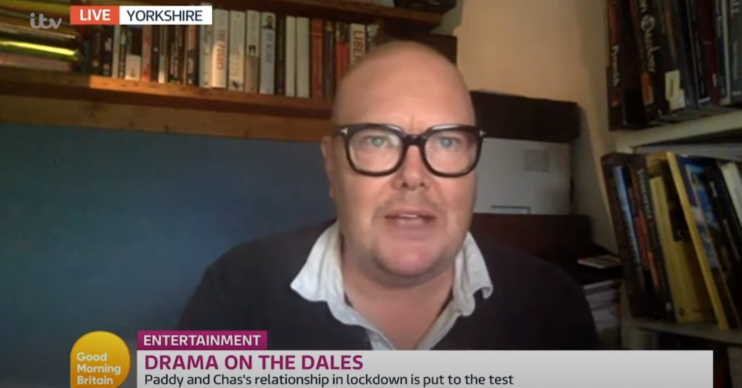 Dominic went back to work a few weeks ago

Emmerdale star Dominic Brunt has admitted he got “snappy” on set filming the lockdown episodes, as he revealed he found the process “terrifying”.

A couple of weeks ago, the ITV soap returned to filming to produce six special lockdown episodes. One of those episodes features Dominic’s alter ego Paddy and Paddy’s girlfriend Chas.

Today (Monday, June 22) the actor appeared on Good Morning Britain with Lorraine to talk about the episode. But he confessed that he found it all “terrifying” and got “a bit snappy”.

He said: “It was like 58 pages in a day or something like that. So we basically had to go from learning nothing for three months to leaning basically a 25-minute conversation between two people, so it was terrifying.

“And Lucy always knows what she’s doing and knows all of her lines so you just have to get everything ready.

“I definitely hit a wall by the end of the day and was a bit snappy. I had to make some phones calls that night just to apologise to some people because I was like ‘I can’t do it, I can’t do it, I need a glass of water.'”

Speaking about Chas and Paddy’s episode tonight, Dominic said there will be ‘no huge reveals or fall outs’. However, spoilers show that it will still be an exciting episode.

As Chas struggles with the pub being shut and feeling cut off from her old life, she wants to make the most of the time she and Paddy can spend with Eve. But the vet has other ideas.

Read More: Emmerdale fans desperate for Nicol and Jimmy to take over the Woolpack

Paddy seemingly wants to drink the cellar dry instead. However it soon becomes clear that his jovial banter is actually masking the fact he wants to get things back on track between them.

Chas later gets emotional when clapping for key workers and Paddy finds a chance to reflect. Eager Paddy soon comes up with a plan for them both. But will Chas allow him to get carried away?