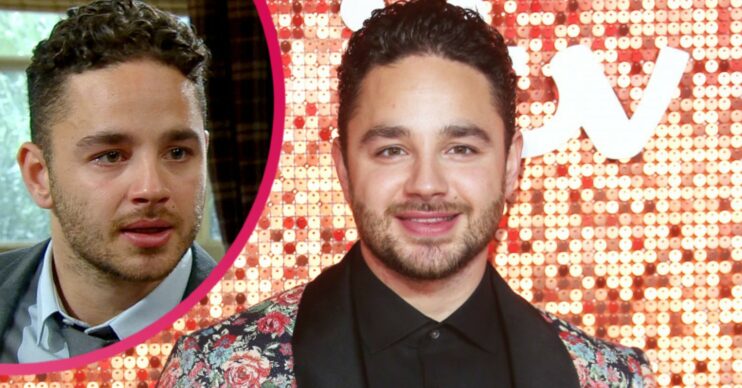 Emmerdale star Adam Thomas has begged to return to the ITV soap.

The 32-year-old actor previously played Adam Barton on the show, before departing in January 2018.

But it appears Adam is desperate to reprise the role once more.

What did Adam say?

Adam made his feelings very clear while tuning into Emmerdale this week.

Sitting in his home, the star commented on a scene involving Victoria Sugden and David Metcalfe.

David has found himself drawn to Victoria in recent weeks, with the two recently spending a cosy evening together.

Get me back there now!

Filming the scene, Adam commentated: “What is going on here? Why are they living together?

“Are they together? No… they’re flirting!”

He captioned the clip: “Get me back there now!!! Hahaha.”

Adam’s character was married to Victoria (Isabel Hodgins) on the soap.

Meanwhile, earlier this month, Adam sent Emmerdale fans crazy as he reunited with his former co-stars.

Documenting the reunion on Instagram, the star posed alongside Danny Miller and Kelvin Fletcher.

He added: “Thank you to these beautiful friends and many more who rocked up!”

Since leaving Emmerdale, Adam has embarked on a new restaurant venture.

The star is the proud owner of The Spinn, which first launched as a restaurant in Manchester in 2019.

Would Adam return to Emmerdale?

His character fled the country after confessing to murdering Emma Barton in order to protect his mum, Moira Dingle.

It has not been confirmed if Adam will ever return to Emmerdale, but he has previously joked about reprising the role on social media.

Read more: What are these former Waterloo Road cast members up to now?

However, Natalie J Robb, who plays Moira, has revealed she’d love to work with the actor again.

Speaking to Inside Soap magazine, Natalie said: “Adam was Moira’s pride and joy, she always called him her ‘sunshine.’ It broke her heart when he went on the run.

“I like that Moira still talks about Adam and Holly, even though they are gone, and I hope Adam Thomas comes back at some point.”