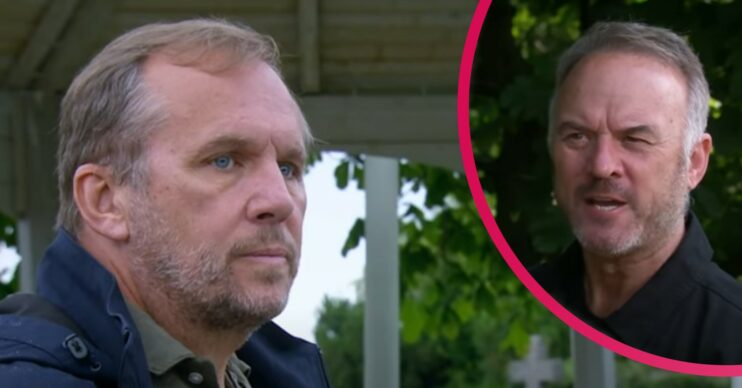 Emmerdale spoilers: Will horrified as he discovers Malone’s body has been dug up

Will moved Malone's body to the grounds of Home Farm

Emmerdale spoilers for Christmas reveal that Will is horrified when he discovers Malone’s body has been dug up, but is all as it seems?

Dawn Taylor shot DI Malone last year and although Harriet originally buried his body in the village graveyard, Harriet and Will moved his body to the grounds of Home Farm.

While Will is in a relationship with Kim, it’s become clear Bernice has feelings for Kim’s man.

In the upcoming scenes Will lets his jealousy show to Bernice when he thinks she’s out on a date with Dan.

This leads Will and Bernice have an open discussion about their feelings for each other but the atmosphere quickly turns sour when Bernice gives him an ultimatum: her or Kim.

However what they don’t realise is Kim is in the hallway and has heard every word.

She ominously makes a call and begins planning a disposal.

Emmerdale spoilers: Will discovers Malone’s body has been dug up

On Christmas morning, Bernice gives Will a hopeful smile and he feels the pressure to make his decision.

Later as he approaches Malone’s grave with Kim and is horrified to find it freshly dug up. He worries that if Kim really did hear something incriminating, this could be a part of her revenge.

Kim reveals she removed the corpse so Will no longer feels tethered to her – he can decide whether he stays or goes.

Will appears touched by the gesture and it later becomes clear that he has made his decision when he proposes to Kim.

But how will Bernice react?