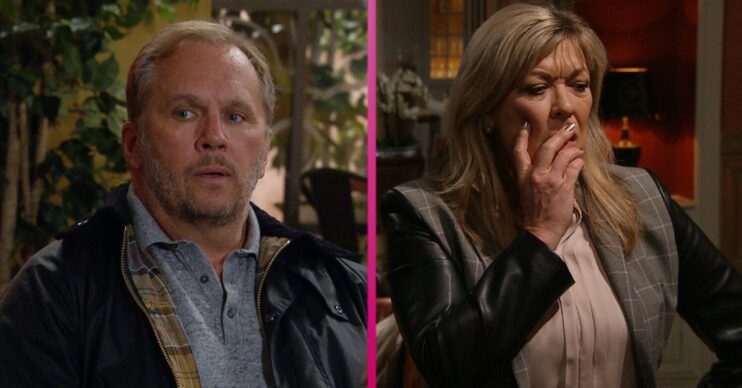 Emmerdale SPOILERS: Will confesses to Kim and plans to flee the village

Is his secret safe with the most ruthless woman around?

Emmerdale spoilers for next week reveal a panicked Will ready to flee after telling Kim that he killed twisted cop Malone.

There’s nowhere to hide for the terrified estate manager when Kim makes a decision that could wreck everything for him.

Emmerdale spoilers: Is Malone’s body going to be discovered?

Will can’t believe it when he discovers Kim has told Priya and Ellis they can move base camp for survivial week to their preferred location.

Kim, of course, has no idea that Malone’s body is buried in that spot and could easily be found by any of the survival challenge participants.

When all else fails, Will decides to go for broke and be honest with Kim.

But what will Kim say when he tells her what he did?

Does Will confess everything?

They are incredibly close, but Will is still taking a massive risk by trusting Kim.

She can’t believe her ears when he admits that he buried Malone’s body on Home Farm land.

Kim’s done many bad things herself, but hearing her boyfriend is a murderer is still shocking.

So, his confession leaves her with a big decision to make about whether to report him or not.

Kim is torn as she contemplates her next move.

Does Kim call the police on Will?

With no time to spare, Will makes haste to pack up his belongings and gets ready to leave.

He can’t take the chance of the police showing up at his door.

Kim knows what he did and he’ll have to answer for his crimes one way or another.

Read more: Where has Harriet Finch been? Fans baffled by her return to screens

Back at Home Farm, Kim comes to a decision and gets ready to put it into action.

What has she decided to do, and what will it mean for Will’s future?