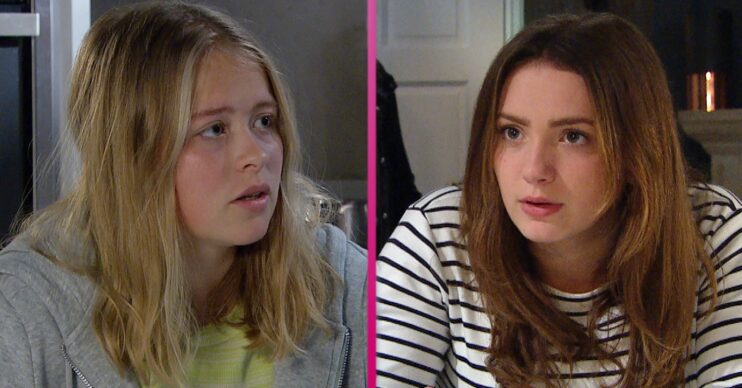 Emmerdale SPOILERS: Who IS behind the ‘attack’ on Liv after she hits the bottle again?

Liv ended up going for a drink with Hannah and George

Emmerdale spoilers reveal what’s next for Liv after she started drinking again.

Over the last few months, Liv has been drinking again after the death of Paul Ashdale, which she blames herself for.

Recently Aaron kicked Liv out of their house and she ended up drinking by Leanna’s grave.

However she began choking on her own vomit. Luckily she was found by Aaron’s boyfriend Ben and was rushed to hospital.

Realising she could have died, Liv decided to stop drinking and get some help.

As she returned home, she ended up getting back together with her ex-boyfriend Vinny and got a new job at The Hide.

Earlier this week, Liv was working in The Hide by herself when two customers ordered alcoholic drinks.

Liv was able to serve them and she didn’t take a drink, but soon Laurel stepped in to help.

In tonight’s episode (Wednesday, August 25) Liv and Aaron surprised Liv with a day out at The HOP.

However soon Liv broke down to Laurel, explaining the constant mentioning of her sobriety was too much.

Later in the village, Liv ran into Hannah and George, the customers she served at The Hide.

They invited her to drink with them and although she declined at first, they convinced her to have a drink.

But could she be in grave danger?

Emmerdale spoilers: What’s next for Liv?

Later this week Liv wakes up with a start, full of confusion and regret with bruises on her arm, confused about what happened to her the night before.

When Aaron returns, explaining he found her in the doorway last night.

She soon struggles with disorienting flashbacks. Later she’s shocked to realise it was Noah who she had a struggle with.

Gabby is left reeling when Liv mentions Noah, uneasy after her own run-ins with him.

Gabby tells Liv that they may be dealing with the aftermath of rape and Aaron walks in on their conversation.

Hearing everything, he storms over and confronts Noah.

Back at home, Aaron urges Liv to report what happened to the police, but Liv feels burdened by the decision she faces.

The next day, Charity does some digging to see if there’s another side of the story.