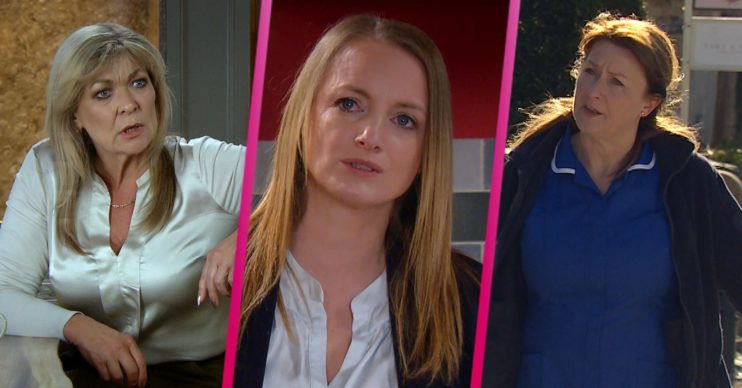 Wendy comes up with a plan

Emmerdale spoilers for next week reveal Wendy is determined to reunite Robert and Victoria.

Meanwhile Jamie suggests to Kim that they get away and Andrea’s poor dog is trapped.

A conversation with Victoria affirms her desire to try and reunite with her brother Robert.

On Main Street, Ethan is unrepentant of blowing the whistle on Luke to Wendy.

Ethan is intrigued when Wendy asks for his help with something important. She soon begs him to find out if the new information could help Robert.

Meanwhile Luke realises he may have helped kill his brother Lee and Wendy is regretting opening this painful can of worms.

Meanwhile Luke is determined to see things through with Vic. However Wendy tried to make him see he needs to be honest with his girlfriend about everything.

2. Kim and Jamie leave the village?

When Will makes a business pitch to Kim, her suspicions about his motives return.

Later Kim confides in Jamie that the reason she set up the surveillance is because someone has been drugging her.

He’s hurt she suspected him, but later suggests they should both escape Home Farm for a while.

Andrea invites Charles to go camping with her and Millie

But Meena does her best to try and put Andrea off the idea.

Meanwhile Gabby is annoyed when Andrea comes into Home Farm with her dog, Princess, to get Millie’s sleeping bag for the camping trip.

Across the village, Meena intercepts Charles to try and sow doubt into his mind about being with Andrea by mentioning that it might be too soon for her to introduce another father figure into Millie’s life.

The next day Noah cleans Gabby’s handbag as Gabby voices how the dog is now on borrowed time.

Later Andrea leaves Princess tied up in the shade so she can speak to Millie.

But soon someone lures the dog into the car and shuts the door. As the sun beams down, Princess tries to escape the trapped car, but has no luck.

When Nicola is unable to attend Jimmy’s plea hearing, unaware it was that day, he plans to go alone.

But when Mandy discovers he plans to plead guilty, she tried to change his mind. She soon steps in to go with him.

5. Nicola cheats on Jimmy with Mack?

Meanwhile Nicola confides in Bernie about her marital woes.

Mack is happy to confirm to Nicola he’ll always be an option for her. Soon Nicola gets glammed up and heads to the scrapyard.

Nicola appears to make a move on Mack and he thinks all of his dreams are coming true.

Will Nicola cheat on Jimmy?

6. Jimmy confesses his feelings for Mandy

When Jimmy returns home he returns to see Mandy at the salon and tells her his feelings are deeper than friendship.

Mandy is gobsmacked and Jimmy immediately regrets his confession.

Later, after Jimmy appears to side with Juliette in an argument, he tells Nicola he’s going to move out.

Tracy is struggling with Frankie’s feeding demands and Nate does his best to support her.

Dr Liam wants to know how Tracy is coping and urges Tracy to look after herself as well as Frankie.

In the salon, Meena opens up to Diane about her past. What will she tell her?

9. Vinny gets a call

Read more: Emmerdale SPOILERS: Meena to kill Jacob as he gets in the way of her and Jacob?

Vinny soon gets the call he’s been waiting for. But who could it be?