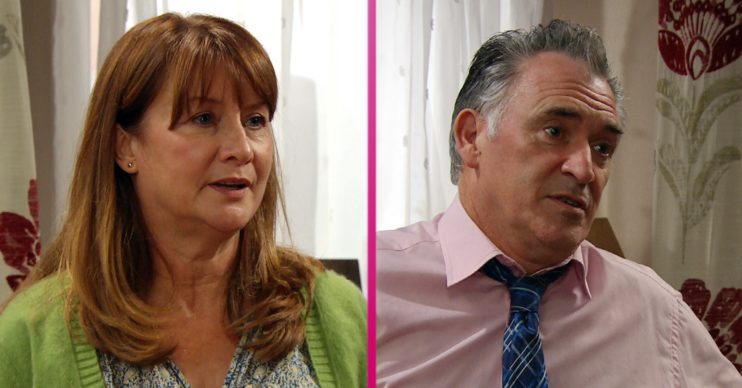 Bob and Wendy have been seeing each other for a while

Emmerdale spoilers reveal Bob wants to move things along in his relationship with Wendy. But is she interested in someone else?

Wendy and Bob have been seeing each other for the last few months. But next week he is worried Wendy is more interested in Dan.

In next week’s scenes Bob confides in Dan how he and Wendy are yet to consummate their relationship and Dan encourages him to try and make a move.

Read more: Who is Mandy’s mum in Emmerdale? Has Vera-Lynn Dingle ever been seen on-screen?

Later, Bob unsubtly plies Wendy with oysters, opera and dark chocolate by candle-light. But things don’t quite go to plan for Bob as it has the reverse reaction and Wendy makes her excuses and leaves.

Bob is soon worrying that he overstepped the mark and ruined things between the,.

The next day, Dan pops over again and offers to fix Wendy’s car for free. Soon Bob is jealous to see the pair chatting together and it’s clear things are still awkward with him and Wendy after the night before.

Later Wendy makes dinner for Bob and Dan. But when Bob is called to the pub to deal with a delivery, he’s uneasy about leaving them alone together. Is he right to be worried?

The next day, Dan makes another excuse to pop in on Wendy and Bob. Bob returns home to find Wendy and Dan cosily playing cards together.

Read more: Who is Tricia Dingle in Emmerdale? How did first wife of Marlon Dingle die?

Bob’s jealousy piques and it causes him to confront the situation. He asks Wendy where they stand, but could this finally sort things once and for all?

Is there a chance Wendy has feelings for Dan, or has Bob completely misread the situation?

Are you looking forward to next week’s Emmerdale episodes? Leave us a comment on our Facebook page @EntertainmentDailyFix and let us know what you think of this story.