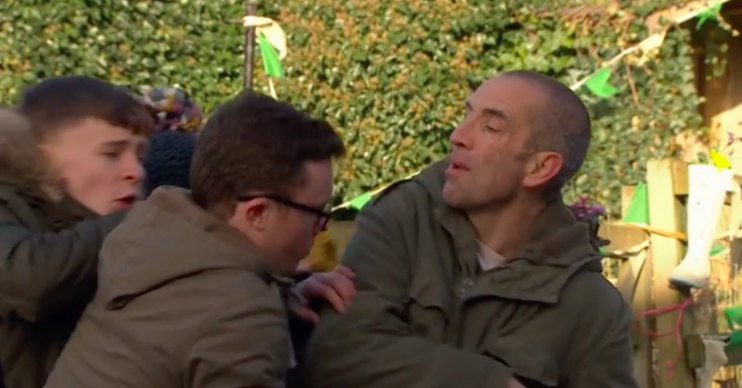 Emmerdale SPOILERS: Vinny kicked out by Sam after pawning his wedding ring?

Time's up for liar Vinny

Fake Vinny Dingle is going to be kicked out of the family house on Emmerdale next week.

The scam artist and his scammer partner Mandy, who is pretending to be his mother, have been back in the village since last year but hiding their secret.

And it looks like next week it’s going to finally be uncovered when Sam’s ring gets stolen and Vinny cops the blame.

In a preview released by ITV, Sam will pack Vinny’s things up and go to sell them like he thinks Vinny has done with his wedding ring to first wife Alice.

Lydia and Samson tried to stop Sam but he insists on carrying out his threat, telling them: “Taking it to the pawn brokers to see how he likes it. It was my wedding ring, it didn’t stop him. Let’s see how he likes someone stealing from him.”

As Vinny and Mandy return – with the ring – Sam still isn’t dissuaded and decides to throw Vinny out for good.

And Lydia agrees with him, saying: “Until Zak’s back, Sam’s the one who decides who lives here.”

“It’s alright, I’ll go,” Vinny says as he tries to get his backs but Sam won’t let him have them.

Only then does Samson step in and try to stop it, saying: “Stop, it’s wrong. I can’t let you do this.”

Viewers know that Samson pawned the ring, from his dad and mum’s wedding, to pay for his school trip to France – and he lied to dad Sam telling him he was going due to a special fund at school.

Read more: Emmerdale fans convinced Andrea is being set up by Kim

Taking to Twitter, fans predicted Samson would let Vinny take the blame for it all – and Vinny would be kicked out but will that still be the case?

One said: “Bet Samson will sell his mum’s ring to pay for the trip…”

A second said: “Yep was obvious. And it’s disgusting that he lets Vinny get the blame for it.”

A third said: “I bet Samson has or will sell Sam’s wedding ring to get money for French trip. Calling it now.”