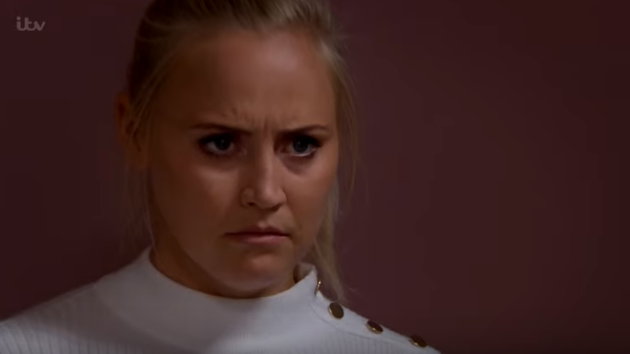 Tracy gets closer and closer to finding out the truth about the factory fire as tonight’s visit to Emmerdale progresses.

In a preview shared on Emmerdale’s YouTube channel, a suspicious Tracy goes into Kerry’s bedroom.

She quickly spots the ‘No.1 Dad’ keyring that she gave her dad, Frank, for his birthday when she was a little girl.

As she sits down on Kerry’s bed, she puts her hand out and finds a passport along with flight information.

Judging by the look on Tracy’s face, she knows Kerry is hiding something from her.

Spoilers for this week also revealed that Tracy will confront Kerry wanting to know what’s going on.

Kerry admits she started the fire that killed Frank but keeps Amy’s name out of it, desperate to protect her daughter.

Determined to stop Tracy going to the police, Amy and Kerry lock her in the house, but Tracy finds a way out and makes a run for it.

But when Kerry runs after Tracy she falls and hits her head hard.

Tracy is horrified when she looks back and sees Amy standing over her mum’s unresponsive body.

Unfortunately, as Frank had been fired from the factory that day and returned to the factory to collect his belongings at the time of the fire, a lot of villagers pointed the blame at him for starting the blaze.