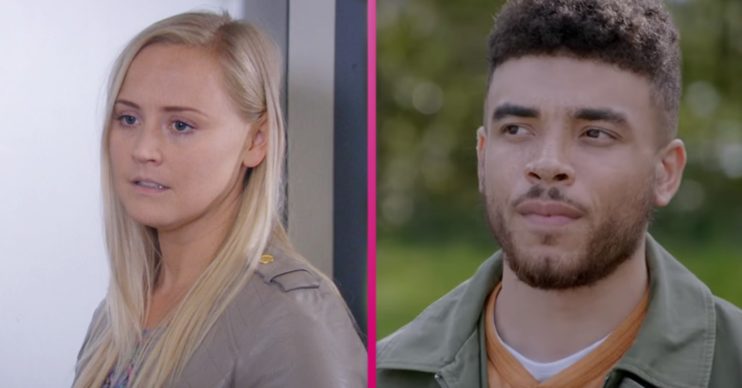 Nate and Tracy haven't been together long

Emmerdale spoilers reveal Tracy Metcalfe is pregnant. But how will she take the shocking news?

In next week’s Emmerdale episodes, Nate and Tracy go to the hospital to get Tracy’s wrist treated after she has an accident.

But after undergoing a urine test, the couple are stunned to learn that Tracy is in the family way.

How will they take the news? Given they haven’t been together long, is it time for some difficult conversations?

Emmerdale: Nate’s reaction to the pregnancy

Whilst it hasn’t been revealed what the couple decide about the baby, Nate actor Jurell Carter explained his alter ego’s thoughts when he discovers Tracy is pregnant.

Speaking to Entertainment Daily and other media at a virtual press event, he said: “I think he’s just completely terrified. She’s on the pill and they’re enjoying that side of the relationship as well.

“They’re quite an intimate couple. But I think they’re both playing it safe so this comes as a massive shock.

“Nate’s terrified and of course with his own family relations it makes him in a more terrified state.”

However Jurell thinks Nate will ‘adapt’ to fatherhood.

He added: “He is terrified but he is very strong minded to the point where he can do anything he sets his mind to.

“So I think he will adapt to fatherhood but it’s going to be a massive task in hand.

“In the back of his head, growing up without his biological father is a massive weight on his shoulders and I think that’s going to be going on in his head all the way through the pregnancy and even the birth.

I think he will adapt to fatherhood.

Will you be watching Emmerdale next week? Leave us a comment on our Facebook page @EntertainmentDailyFix and let us know what you think of this story.