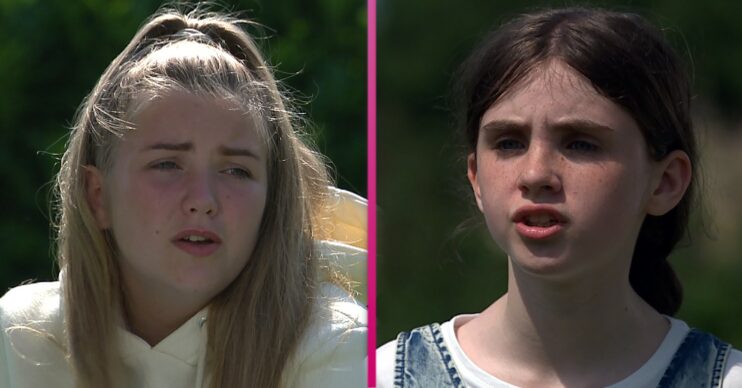 Is Marlon in trouble?

Emmerdale spoilers for tonight reveal Cathy comes clean to April about the trolling.

Meanwhile Matty gets hurt while helping out with the Woolpack barbeque.

Read more: OPINION: Emmerdale: ‘I told you David has ridiculous taste in women’

Over the last few months, April has been bullied online by her classmates. However what she doesn’t know is that her friend and aunt, Cathy, is the one who started the trolling.

Recently Cathy confessed to her twin brother Heath that she was the one who started the online hate towards April.

But as the kids returned to school, April found herself still being picked on. She came home from school being sick, clearly worried.

Tonight Cathy and Heath feel terrible knowing April has skipped school. Cathy realises she needs to come clean to her.

Later Cathy finds April at Donna’s grave and April is shocked when Cathy breaks down and reveals she started the online trolling.

April is furious at Cathy’s confession and heads off, irate. Cathy is left terrified of the consequences to come.

Will April tell everyone what Cathy has done?

It’s the day of the Woolpack barbeque and a stressed-out Marlon ropes Matty to help with the barbeque, offering to pay him cash in hand.

As Marlon exits, a pleased Matty gears up to use the grill.

Later he squirts the lighter fluid on the barbeque, sending up a fireball of flame burning his hands.

Marlon beats himself up as Chas tells him they could end up losing everything if Matty decides to sue them.

But what will Matty do? Is Marlon in trouble?