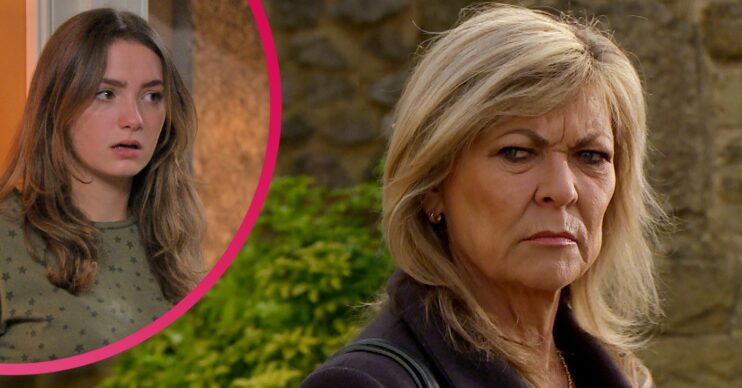 Kim is shocked by who shows up

Emmerdale spoilers: Will returns to the village

A few weeks ago, Will told Kim that he murdered DI Malone and buried his body on the grounds of her home – Home Farm.

Fearing the police would find out, he fled the village.

During his time away, Kim’s former daughter-in-law Andrea was murdered by Meena Jutla and her body was left in the burning maze.

Later police revealed that Andrea’s death was no accident.

In tonight’s episode, it’s the day of the memorial service. The day is interrupted when Will walks back into Kim’s life.

Although she’s relieved to have him back, she’s still angry about him leaving in the first place.

As Andrea’s memorial begins, Will is sad to watch Kim waiting for Jamie to show up. Her gaze is fixed on the road outside the church.

Kim’s excitement grows when she sees a car arriving late. However it turns out to be Andrea’s mother, Hazel.

In the church Charles delivers an emotional address to the congregation which Meena relishes.

When the service is over Hazel has a revelation that will shock Kim.

This week, Rhona and Brenda decided to put everything behind them for the sake of April and Cathy.

Rhona tried to bring the two girls together, however April made it clear she didn’t want to be around Cathy.

After an emotional week Marlon makes an impromptu proposal to Rhona who thinks he’s joking. He quickly tries to hide his hurt.

But will Marlon propose properly to Rhona?