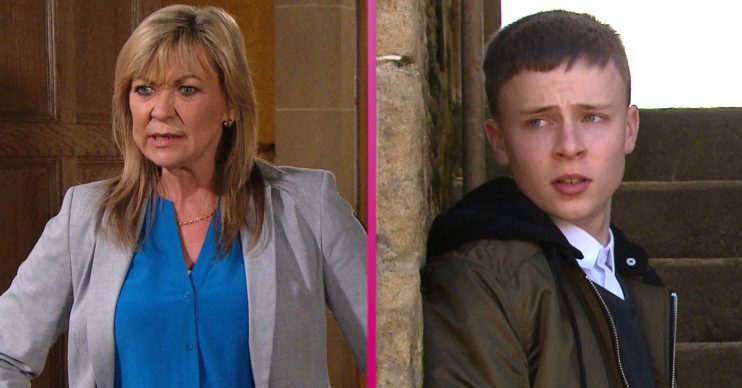 Kim takes her anger out on Gabby

Emmerdale spoilers for tonight reveal Kim grows increasingly suspicious 0f everyone around her.

And what will Samson do after Lydia is robbed?

When Kim viciously takes her worries out on Gabby, Gabby tells Noah she’s not going to be pushed around much longer.

Kim then encounters a mutinous Al and Jai at the HOP and manages to see them off.

But she’s thrown to watch the security video of Gabby threatening revenge.

Back at Home Farm, Will comes over to check on Kim, but in her paranoid state, this just makes her more suspicious.

She sends him packing and firmly bolts the door behind him shut.

As she sits alone, the brandy has Kim hearing phantom intruders.

She reaches for a shotgun to protect herself as she carries on drinking.

What will Samson do?

In last night’s episode (Tuesday, May 25) Lydia was robbed outside of Wishing Well Cottage.

Two school boys came along and took money from her purse to get revenge for the pension scam, convinced Lydia was behind it.

Samson witnessed the robbery. Although he didn’t step in, it became clear her recognised the boys.

As Lydia went to report what happened to the police, Samson made a call and put a crowbar in his schoolbag.

But what will he do next? Will he go against Lydia’s wishes and act violently towards the lads?