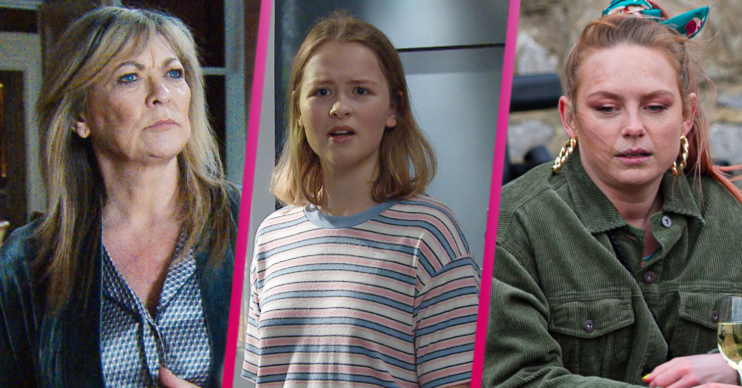 Meanwhile Liv is still under house arrest and Amy makes a confession to Matty.

A couple of weeks ago, viewers saw Kim’s drink decanter was being spiked by an unseen person.

Her health has continued to decline and she’s become convinced she could be in the early stages of dementia.

In last night’s episode (Tuesday, May 18) Kim discovered Gabby had been taking money from the company accounts.

But to cover, Gabby told Kim she gave her money for new clothes and she had taking the money to do invoices.

Unable to remember and knowing her memory hadn’t been correct, Kim called her doctor to book a dementia test.

Tonight, Gabby spots the dementia test appointment in the notebook and she urges Kim to keep it a secret from Jamie.

Soon Kim pours herself another glass.

Liv is still under house arrest

In last night’s episode Chas placed Liv under house arrest in an attempt to sober her up and get her to think clearly.

She continues to keep her in Mill Cottage. Can Chas get through to Liv or will she make things worse?

Amy makes a confession to Matty

Amy blurts out to Matty that she loves him, but he is taken aback. Amy doesn’t get the response she was hoping for.

Is this the end of their relationship, or will Matty tell her he feels the same way?

Will you be watching tonight’s Emmerdale?