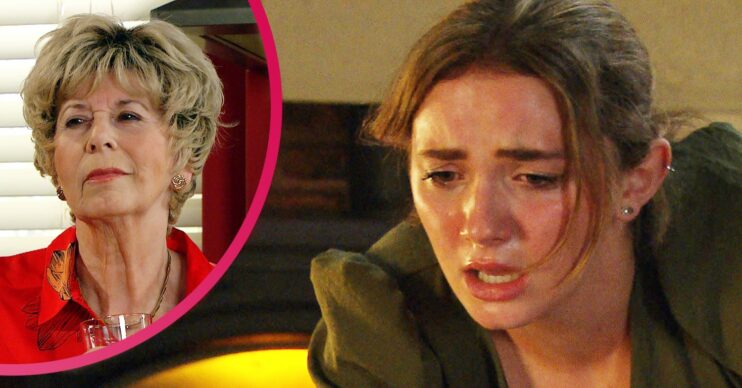 Will Gabby be okay?

Meanwhile Leyla grows increasingly frustrated with Liam’s behaviour and Charity and Mack get an idea.

Gabby and her grandmother Diane have secretly been planning to move to Portugal and after Kim’s arrest, Gabby rang Diane to tell her what happened.

Tonight Gabby tells Diane they need to go sooner, but will that ruin Diane’s plans?

The teenager does her best to secretly pack as she suffers pain in her stomach. As she tries to lug her suitcase out of Home Farm, she crumples to the floor and starts going into labour.

There’s no one around to help, no power in her phone and the house in darkness due to a power cut.

Diane shares a moment with Bernice as they prepare to collect Gabby and escape the village.

Little do they know, Gabby is fighting her intense labour pains.

Is she in danger?

Will Leyla speak to Liam?

Leyla becomes increasingly frustrated at Liam’s refusal to engage with her as he pretends to get ready for work.

Tracy recommends Leyla should push for more answers and bring matters to a head. Could it backfire?

Charity and Mack make a plan

Charity and Mack are itching to get involved in some mischief.

When Mack hears from Charity about all of Chloe’s obvious wealth, he senses an opportunity.