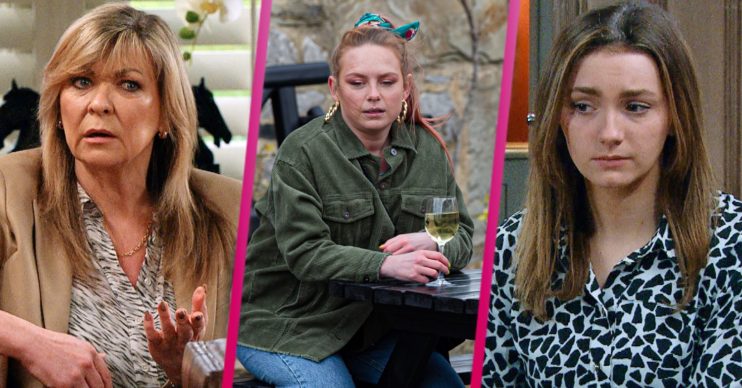 Will Kim be okay?

Emmerdale spoilers for tonight reveal Kim goes for her dementia test and Amy sees Matty after her awkward declaration.

A couple of weeks ago, viewers discovered Kim is having her drink decanter spiked. However the identity of the person poisoning her has remained a secret.

Kim has no idea that her drinks are being spiked and is convinced she is in the early stages of dementia.

In last night’s episode (Wednesday, May 19) Kim rang her doctor to have a dementia test.

In tonight’s episode, it’s the day of Kim’s dementia test and she’s terrified as she heads out for the test alone. Will she be okay?

But before long Jamie discovers that Kim is going for a dementia test and is appalled Gabby was told before him.

Soon Gabby is outed for her meddling. How will Kim react?

Can Amy and Matty resolve things?

Read more: Emmerdale: Aaron should be with Mackenzie, not Ben, fans say

In last night’s episode, Amy let slip to Matty that she loved him in front of their friends. However Matty didn’t say it back.

Tonight Amy is mortified when she sees Matty after her awkward declaration yesterday. But will they be able to resolve things?

Aaron was recently told he was going to be charged for breaking into Eric’s house and could be facing going back to prison.

Meanwhile in last night’s scene, Chas thought she was getting through to Liv. However she ended up ordering alcohol to the house instead of a takeaway.

Will she be able to help her?

Will you be watching tonight’s Emmerdale? Have you been watching this week’s episodes?