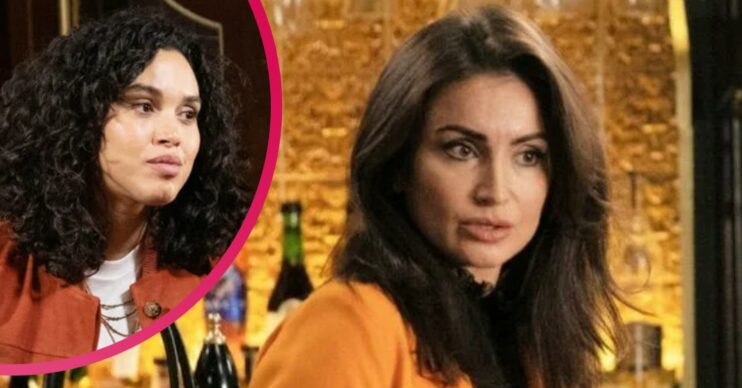 Emmerdale spoilers tonight reveal Leyla‘s big secret could be exposed by Vanessa’s new love, Suzy. But what is their mysterious connection?

Meanwhile, Kerry finds out the truth about Priya and Al, but what will she do about it?

Also in Emmerdale, Kim makes huge demands of Jai – but will he give in to her?

All this and more in Emmerdale spoilers tonight.

Vanessa is trying to make it up to Suzy after their disastrous non-date the day before.

She takes her to a wine tasting at David’s and things go well, so they move on to the Woolpack for another drink.

However, as they are enjoying each other’s company, Leyla arrives in the pub and is surprised to see Suzy.

Vanessa is intrigued as to how they know each other and Suzy quickly covers it’s through work.

But it’s soon clear that’s not the whole story…

Suzy promises a shaken Leyla she’ll keep her secrets – but will she?

What is Leyla hiding?

And how does Suzy fit in?

Convinced Al and Belle are having an affair, Kerry gets her wires crossed and interrupts their business meeting with a wellness influencer.

However, she has no idea she’s barking up totally the wrong tree, and it’s not Belle she should be worried about…

Cain finds out about Al and Priya

Al and Priya discuss their kiss and both agree it should never have happened.

They decide to keep quiet and put it in the past.

But Cain has overheard everything and decides to use the information to his advantage.

Cain lets slip to Kerry that Priya and Al have shared a moment together.

Fuming Kerry throws a pint over Al, who is still trying to impress the wellness influencer.

Carrie backs out of the deal and Belle is distraught.

Smug Cain watches the drama unfold with a smirk on his face. Al quickly realises who was behind the truth coming out.

As the battle lines are drawn once again, where will this war end?

Jai is frustrated over his job, but he’s left stunned when Kim offers to promote him.

There’s a catch, though, he has to fire his colleagues and re-hire them on zero-hour contracts.

Jai is horrified and Laurel insists he must fight for his friends’ rights.

But when Kim tells him if he doesn’t do it, she’ll find someone who will, what will Jai do?

Will he sacrifice his job for his friends?

Read more: Leyla confronted over her secret in Emmerdale

Chloe ditches Noah to go off with Nate again, leaving the teen seething.

Nate is upset after Tracy admits she is dating someone new and turns to Chloe for comfort.

Chloe is quick to offer her shoulder, but Noah is fuming.

He watches them together, revenge in mind. But what is he planning?