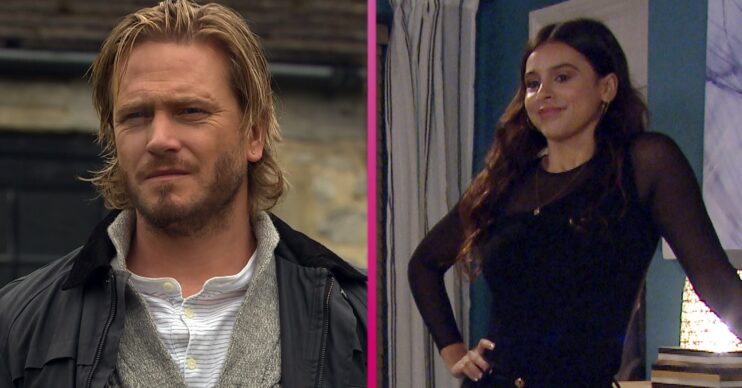 Is David in danger?

Meanwhile Rodney’s plans to try and win Diane back are scuppered, and Faith struggles with the pain of her arthritis.

Earlier this week Priya offered to move in with David after seeing him over exert himself.

However the next day, Meena returned to the village and wasn’t happy to see packed bags outside David’s house.

Thinking they belonged to Victoria, she prepared to strangle her, but she soon discovered they were Priya’s.

After learning David was at the Hide, Meena went up there and found David and Victoria chatting.

David was struggling being in The Hide after he was shot in the restaurant by Russ a few weeks ago.

David has been prescribed super-strong painkillers to ease the discomfort of his injury but Meena is clearly planning something as she tells David to let her take control of his medication from now on.

Later, Meena does her best to trigger his anxiety as she makes him relive the events of The Hide siege.

Meena smiles to herself as she replaces David’s extra-strength painkillers with paracetamol. She’s pleased to have him just where she wants him.

Rodney continues his campaign to try and win Diane back. However his plans are scuppered when Belle offers her services at the B&B.

Faith struggles with the pain

Read more: Emmerdale spoilers: Will confesses to Kim  and plans to flee the village

Meanwhile Faith is self-medicating with alcohol to cope with the pain of her arthritis.