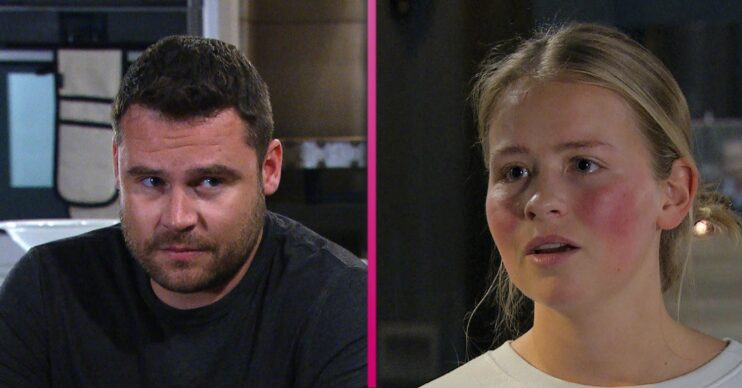 Has Liv pushed Aaron too far?

Emmerdale spoilers for tonight reveal Aaron is furious when he comes home and discovers Liv has been drinking again.

Will he disown her?

Recently Liv wasn’t happy when she found out her brother Aaron may possibly be moving away to Cornwall with his boyfriend Ben, as Ben had been applying for jobs by the coast.

Liv decided she wouldn’t be going with them, however she wanted Aaron to stay.

In last night’s episode (Tuesday, November 23) Ben’s potential new employers called The Hide asking for a reference from Kim, but Liv picked up.

She pretended to be Kim and gave him a bad reference over the phone.

Later Ben received a message saying he had been rejected from the job, but he was confused he thought the job was his and he just needed a reference.

Thinking Jai gave him a bad reference, he stormed over to the HOP and accused him of giving him the bad reference.

Liv admitted she was behind the bad reference, leaving Ben and Aaron furious. After seeing her ex-boyfriend Vinny on a date, Liv took a bottle of vodka from the Woolpack.

She went back home and began drinking.

Read more: Emmerdale SPOILERS: Dawn in danger when she makes a play for Meena’s new man?

Tonight Aaron assures Ben he’s ready to move away from the village with him if he needs to and they share a kiss.

When they return to Mill Cottage they discover Liv has relapsed and Aaron declares he’s done picking up for his sister. Liv is in despair fearing she’s driven her brother away for good this time.