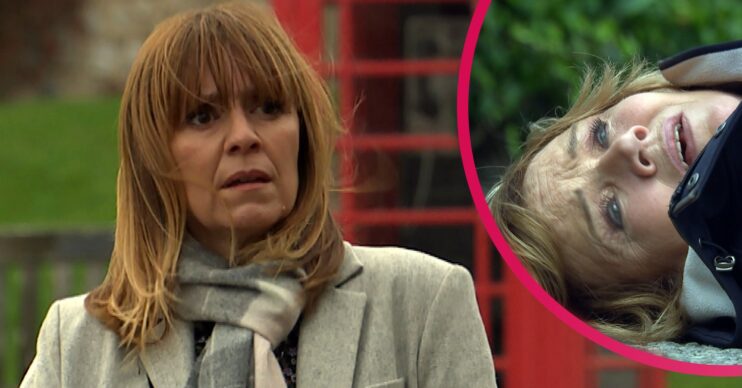 Brenda and Rhona get into an altercation

Emmerdale spoilers for tonight reveal Rhona hits Brenda and she ends up falling to the ground.

Meanwhile Moira insists Matty is entitled to compensation and Kim makes a purchase.

April comes clean to Rhona that and admits that she’s being bullied again, but now knows who it is.

Panicking Bob starts to search for Cathy. However Rhona finds her first and insists she’s telling Bob, Brenda and the school about her bullying April.

Frightened, Cathy makes a run for it.

On Main Street a confrontation develops as Cathy tries to get away from Rhona.

Brenda steps in as Rhona grabs Cathy to stop her from running away again.

Soon Rhona elbows Brenda off and catches her in the face.

When Brenda goes to grab Rhona again, she shoves her and Brenda falls roughly to the floor.

Everyone is left shocked by the incident, but will Brenda be okay? Or has she been badly injured?

Read more: OPINION: Emmerdale: ‘I told you David has ridiculous taste in women’

Earlier this week, stressed-out Marlon roped Matty into helping with the Woolpack barbeque.

However Matty put lighter fluid on the barbeque which sent a fireball of flame up, burning Matty’s hands.

Marlon began to beat himself up, and Chas was furious that Matty hadn’t been given proper training or health and safety on using the barbeque.

Tonight Moira insists to Chas that Matty is entitled to compensation for his injuries, which will leave him unable to work.

Kim is chuffed when she buys herself a new race horse, who she called ‘Medicinal Brandy.’