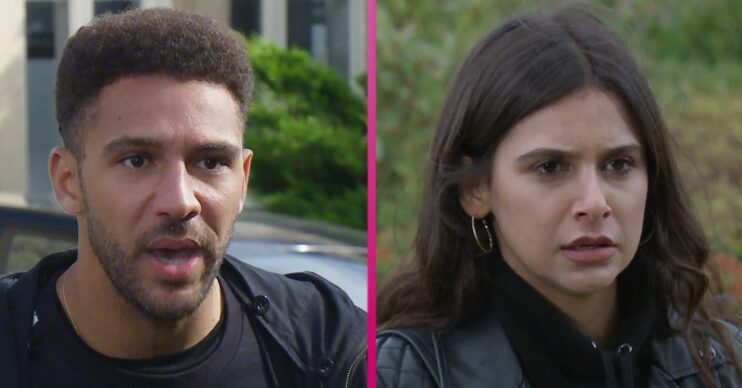 Meena gets a shock

Meanwhile Meena breaks into Amy and Victoria’s house and Al makes a flirtatious comment at Chas.

Kerry begins to search for Noah and Chloe before it’s too late.

On a country road Kerry is confronted by two thugs who threaten to harm Amy unless Kerry can track the two teenagers down.

Terrified, Kerry returns to the village to update Charity, Mack and Sarah on her altercation..

Meanwhile runaway Chloe wonders if Noah is already starting to get cold feet.

Soon the two teenagers are spotted by Kerry and Charity and driven back to the village.

Charity is adamant that they can’t be together but Kerry privately worries about Chloe to her life in relative captivity.

What will Kerry do?

Meena sets her sights on Billy

Meena finds even less support from Manpreet as she sets out to win David back.

However Meena gets a shock when she finds out David and Victoria have gone to Portugal.

Furious, she sneaks into Victoria and Amy’s house and smashes the place up.

When Amy returns home she’s horrified to find the damage and calls the police.

But when PC Swirling goes to interview Meena she denies everything and isn’t arrested.

Amy vows she’s going to prove it was her and it’s about to get physical when Billy intervenes.

Meena calls him her Knight in Shining Armour. Does Meena have him keenly in her sights?

Al unveils a new staff uniform for the Woolpack team, making a flirtatious comment at Chas.

Dawn has a theory

With Kim still away, Will is starting to feel stir-crazy cooped up at Home Farm with Bernice.

However Dawn has a theory that leaves him feeling uncomfortable – Bernice might fancy him.