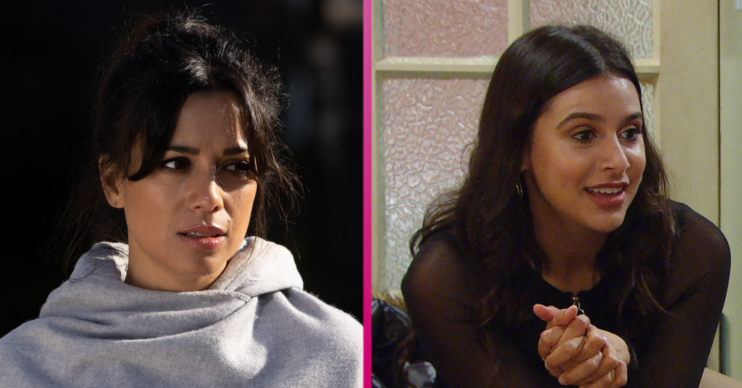 Priya struggles as she goes out into the village

Meanwhile Meena convince Billy to let her move in over Christmas and Sam and Lydia continue to deny their love for each other.

Anxious about being in social situations Priya tries to come up for a reason to get out of attending the carol concert with Amba and soon finds an excuse.

She later regrets letting her daughter down and makes her way to the village hall in order to catch the rest of Amba’s concert.

When Rishi is called away to act as an emergency Santa, Priya starts to feel overwhelmed.

With her panic rising, Priya stumbles away from the crowd, leaving Amba behind.

Is Amba in danger?

Meena convinces Billy to let her move in

After she began dating Billy, Meena has become determined to move into his home, especially after getting into an argument with her sister Manpreet.

Meena is overjoyed after managing to convince Billy to let her move in for Christmas, despite his obvious reservations.

When Dawn awkwardly bumps into Billy at the shop, he updates her on Meena’s continuing campaign to move herself into his house.

They smile before parting and it’s clear that both Billy and Dawn are regretful at how things have turned out.

Meanwhile after everything that’s happened with Liv, Lydia is still staying with Marlon and Rhona.

Lydia and her husband Sam continue to deny the love they have for each other.

But are they both missing each other?