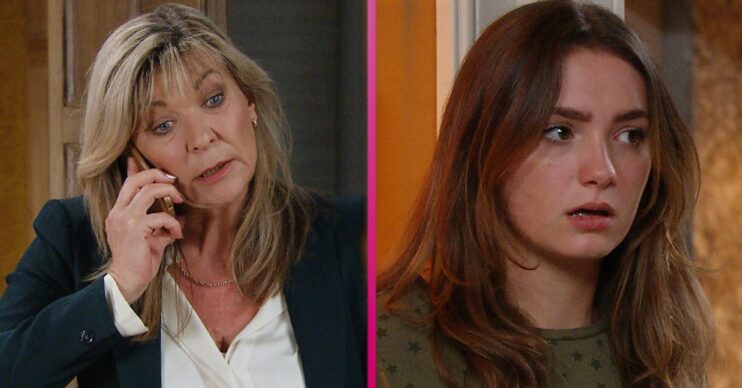 Will Gabby leave the village?

Emmerdale spoilers for tonight reveal Gabby is shocked when she overhears Kim talking to her lawyer.

Meanwhile Meena tells Victoria that David wants her to stay away.

Kim proposes to Gabby that she draws up a will, giving her sole parental rights to her child.

Later Gabby overhears Kim making a call to her lawyer in which she ruthlessly demands she gets full custody of Millie by any means possible.

Gabby is shocked to hear how determined Kim is to get Millie.

Later, frustrated by her own situation, Diane suggests to Gabby that they flee the village to get away from their troubles.

Last week, Meena returned from Ibiza and began looking after her boyfriend David, who is still recovering from being shot.

However she switched his stronger painkillers for paracetamol and David has been in a lot of pain.

Meanwhile, Victoria has been growing suspicious about Meena and her odd behaviour.

Tonight Victoria is hurt when Meena tells her David wants her to stay away from him.

April gets some news

A few weeks ago, April discovered her friend and aunt, Cathy, was the one who started bullying her online.

After it came out what Cathy had done, Brenda took Cathy away for a break. However it looks like she will soon be returning.

When April learns that Cathy is coming back to the village, it’s clear she’s worried.