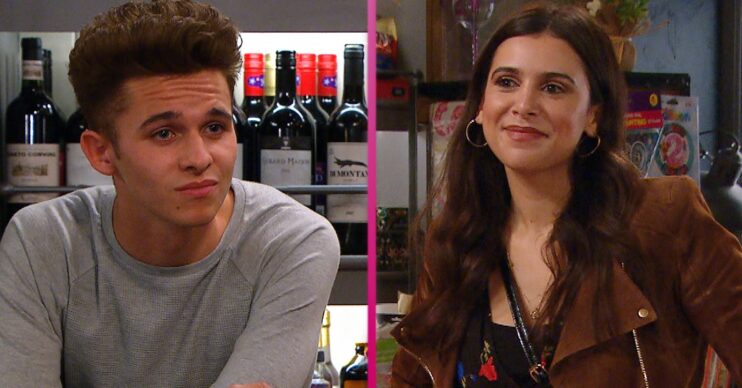 Will Jacob regret making an enemy of Meena?

Emmerdale spoilers for tonight reveal Meena puts her plan in motion to get Jacob out of the village.

Meanwhile Matty puts his foot in it with Billy and Brenda tries to help Faith.

Jacob returned to the village a few weeks ago after six months away.

However as his return stopped Meena from moving in with her boyfriend, Jacob’s dad, David, she felt he was an obstacle and has been trying to get rid of him.

She soon begins to put her plan in motion.

Tonight Meena offers to pay for Jacob’s airfare if he wants to go travelling with Leanna, as long as he keeps it a secret.

Jacob plays along, but after Maya, he can tell when he’s being manipulated.

Later when Meena wants to celebrate Jacob’s impending departure. However he’s only too pleased to burst her bubble.

David is oblivious as battle lines are drawn between Meena and Jacob.

Matty puts his foot in it

Matty ends up putting his foot in it by telling Mack about Leanna’s infatuation with Billy.

Billy is seething as he realises he’s never going to hear the end of this.

Meanwhile Faith is avoiding Chas, who thinks she took Cain’s money to leave the village. Brenda tries to talk some sense into Faith, but Faith struggles to hear it.

She tells Brenda to sort out her own relationship put before getting on her high horse.

Later Pollard is desperate to make amends with Brenda an she finds herself powerless to resist him.

When Brenda suggests she has a better plan than kicking out Faith in her hour of need, Pollard is all ears.

Meanwhile in the Woolpack backroom, Chas is left crestfallen when Faith give back Cain’s money and, fighting back tears, exits with her head held high.

Later at Pollard’s barn, Brenda tells Faith that she can stay but she is moving in too to ensure there’s no funny business. Faith is genuinely grateful for the support.

Will she tell her family what’s going on?

Emmerdale airs tonight at 7pm on ITV. If you want to watch this week’s episode early or catch up on last week’s episodes, they’re available to watch on ITV Hub.