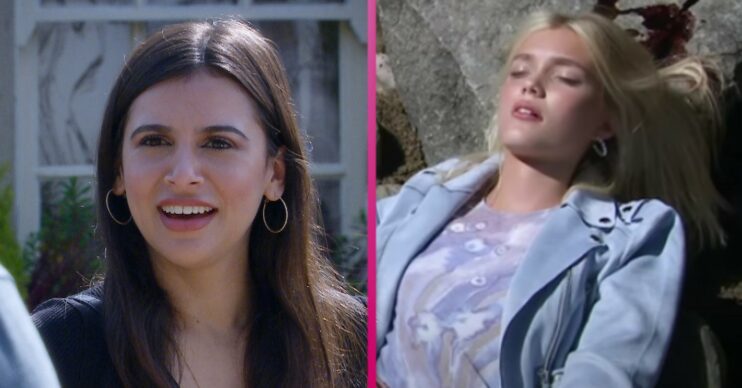 Emmerdale spoilers for tonight reveal the police believe Leanna’s death was an accident.

Emmerdale spoilers: The police think Leanna’s death was an accident

Leanna tried to get away from Meena, however she ended up catching up to her.

Although Leanna said she wouldn’t tell anyone the truth about Nadine’s death, Meena didn’t want her to get away.

She ended up pushing Leanna off the humpback bridge and the teenager fell to her death.

The next day her body was discovered by Bernice. The police went to see Liam and he was told that Leanna’s body was found.

Relieved, Meena can’t resist and triumphal smile as she plays with the ring she pried from Leanna’s lifeless body.

Has she got away with murder?

Meanwhile David feels committed to Meena again, unaware that she is the one who killed Leanna.

He chats to Victoria and they part as friends with a sad smile.

Last week Gabby was furious when she discovered Noah went through her underwear.

Later Noah followed Gabby back to the village leaving her creeped out. When she discovered he was the one following her, Gabby had a go and Noah said some cruel words to Gabby.

However tonight, in the Hide, Gabby and Noah bond. Have they put things behind them?

Will you be watching tonight’s episode? Leave us a comment on our Facebook page @EntertainmentDailyFix and let us know what you think!