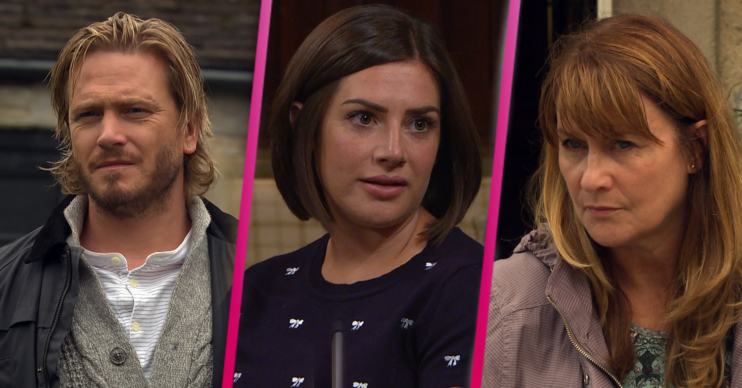 Emmerdale spoilers for tonight reveal who was shot in The Hide.

Emmerdale spoilers: Who got shot?

He demanded Victoria transfer him Harry’s £50k from her bank account and got her to open up the safe in The Hide.

While in the office, David hid and luckily Vic saw his phone and hid it under the table.

When Russ, Vic and Wendy left, David grabbed the phone and rang his son Jacob, telling him to call the police.

However when Russ took Vic and Wendy back downstairs he heard David’s phone ringing.

When he went back up to the office, he demanded David come out and also took him hostage.

David explained the police were on their way and they tried to convince Russ to let them go.

Meanwhile, outside the police arrived.

As a phone rang, Victoria made a move to try and get the gun off Russ and David followed her.

Russ soon turned around and shot. Outside the Hide the gunshot could be heard, but who was shot?

It seems we will find out in tonight’s episode.

Meanwhile Tracy comes back home for another visit. She warns Nate not to expect an instant fix, but he’s proud of how she’s working through it all.

Read more: Emmerdale: David to die a hero after trying to rescue Victoria from gunman Russ?

Recently Marlon has been worried about the finances at the Woolpack.

He and Chas decided to host a barbeque at the pub and Chas gave him a budget of what to spend on the equipment they’d need.

Tonight Marlon makes a reckless gamble, but is he making a huge mistake?

Will you be watching tonight’s episode of Emmerdale?