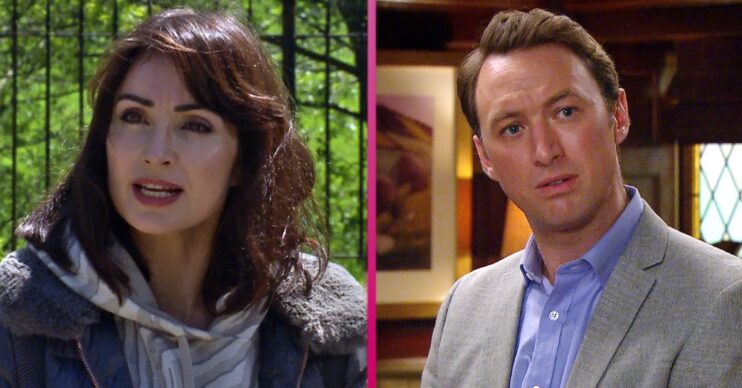 Meanwhile Tracy opens up to Nate about her feelings.

All this and more in tonight’s Emmerdale?

To stop Leanna telling her secret, Meena pushed Leanna off the humpback bridge.

The teenager fell to her death and her body was later discovered by Bernice.

After learning about his daughter’s death, Liam was devastated. Police later revealed they believed Leanna’s death was an accident.

This week, he struggled with his grief and ended up destroying a memorial for Leanna made by her friends.

In an attempt to make up with Jacob, Liam asked him to help him sort through Leanna’s things.

Jacob asked Liam about the ring he gave to Leanna on her birthday, as he didn’t see it in her room.

Liam revealed she wasn’t wearing a ring when she was found. However neither of them know Meena took the ring off Leanna’s body.

Liam became distressed and later went to visit Leanna’s memorial before driving out of the village.

Tonight Leyla is distressed that Liam will come to harm.

Will Jimmy tell Nicola the truth?

This week, Jimmy was in court for his trial. He pleaded not guilty to death by dangerous driving.

Mandy Dingle attended his first day in court to show her support and read Jimmy the speech she wrote for the judge.

Overcome with guilt and gratitude he ended up kissing Mandy.

Later Jimmy was found not guilty, but will he tell his wife Nicola about the kiss with Mandy?

Read more: Emmerdale: Has Liam left the village for good as he grieves for Leanna?

Over the last few months, Tracy has been struggling. After accidentally scratching her baby daughter Frankie’s face, Tracy feared hurting her.

But tonight an exhausted Tracy pours out her feelings of inadequacy to Nate.