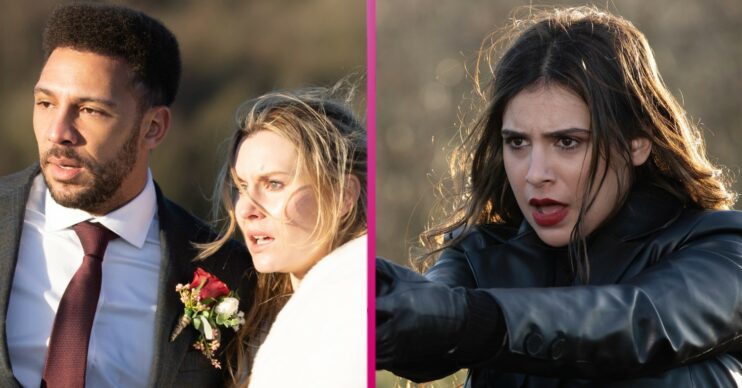 Meena is back for revenge

Emmerdale spoilers for tonight reveal Meena goes after her revenge on Billy and Dawn’s wedding day.

Meanwhile Chas wants to get through to Cain and Liv thinks Vinny is proposing.

In last night’s episode (Monday, February 14) after Billy and Dawn’s wedding, Dawn was taken by Meena in a limo.

At a remote viaduct, Meena smiles as she taunts Billy and Dawn with her gun.

Billy is horrified when Meena tells him about the little game they’re going to play where he gets to save either himself or Dawn.

She threatens to kill them both if Billy doesn’t make a decision.

Billy tells Dawn he would always take a bullet for her and Meena points the gun and fires… someone is shot.

As it dawns on the villagers that Meena is back, more than one life hangs in the balance as the dramatic week continues.

Meanwhile at Home Farm, Will and the wedding guests are increasingly concerned about Dawn and Billy’s whereabouts.

Chas tries to talk to Cain

A determined Chas manages to climb through the window to get to Cain.

His mood doesn’t change as she sits next to him and pulls out another bottle to help him talk things through.

Vinny and Liv happily play video games while Liv thanks Vinny for taking her mind off of the teenagers who recognised her in The Hide.

When Vinny presents her with a jewellery box, Liv is mortified when she misinterprets the romantic gift as a marriage proposal.