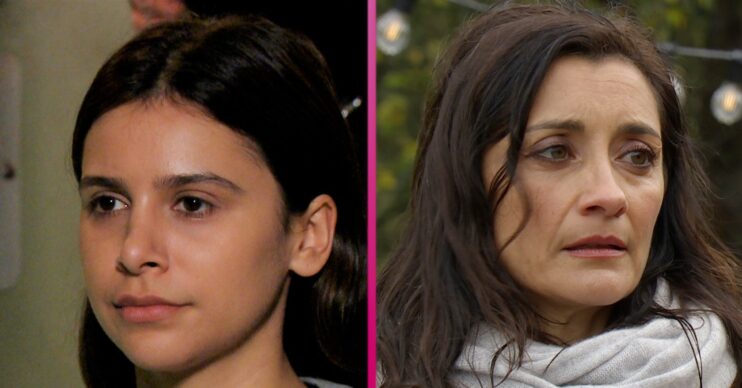 Emmerdale spoilers for tonight (Monday, April 4 2022) reveal Meena prepares to put on a show in court and bring her sister down.

Meanwhile Kim is thrilled when she convinces Hazel to bring Millie to Thomas’s christening and Moira worried about Nate.

Emmerdale spoilers: Meena has a plan

A few weeks ago at Meena’s plea hearing she pleaded guilty to all of her crimes except the murders of Ben Tucker, Leanna Cavanagh and Andrea Tate.

Manpreet was left terrified at the thought of testifying in court.

Tonight Meena is determined to walk free from her crimes and put on a show in court at the same time.

Meanwhile Manpreet decides she is going to testify.

She accepts Ethan’s offer to help her prepare for court and bravely decides to face her fears.

The news about Manpreet testifying reaches Meena in prison.

She’s all fired-up and ready to put on a show-stopping performance in court, excited by the opportunity to publicly destroy her sister.

Meanwhile Gabby plans Thomas’s christening. Kim is thrilled when she manages to convince Hazel to bring Millie to the christening.

Vanessa and Suzy bump into each other again

Vanessa bumps into Suzy, the woman whose cake she accidentally ruined last week.

Will the two manage to put everything behind them?

Read more: Emmerdale’s most complained about episodes ever – it’s quite the list

Last week Nate was upset when he was unable to see his daughter Frankie.

Tonight Moira grows concerned about Nate’s wellbeing when she finds him and Ryan very drunk early in the afternoon.

Will Nate open up to Ryan?