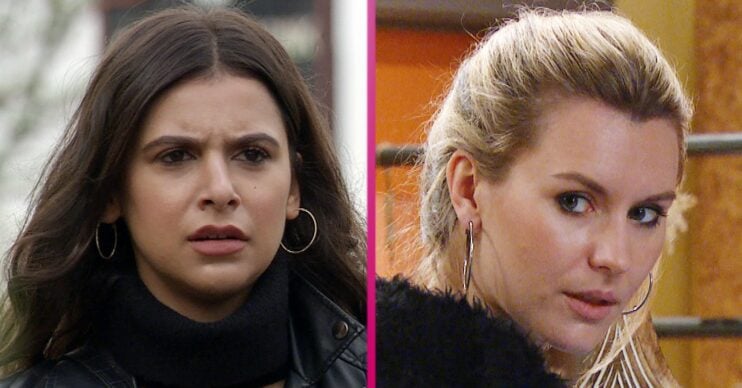 Meanwhile Billy and Dawn pick a date for their wedding, unaware Meena has seen their ‘save the date.’

Read more: Where is Emmerdale farm and who lives there?

Billy is angry to hear that Mack kissed Dawn.

Mack and Charity are over but Vanessa messes with Mack’s head when she tells him Charity was actually coming to apologise to him before he messed up by kissing Dawn.

Can Charity and Mack sort things out?

It’s the day of the hearing and Vinny is excited.

In her prison cell, Liv packs and prepares to go home.

Vinny worries about telling Liv that Aaron isn’t coming back.

Unable to burst her bubble, Vinny tells her Aaron is on his way but he feels terrible about his lie.

Jacob and Liam get bad news

Leyla and Jacob discuss Liv’s hearing. Liam tells them that the police are packing up the investigation van.

Outside the village hall, Liam and Jacob are left gut punched when DS Rogers informs them they’ve received information that Meena may have left the country.

Jacob has a go at Vinny and storms off. Leyla finds Jacob sitting by Leanna’s grave.

Thinking of what David would do, Leyla takes inspiration and comes up with an idea to help Jacob through his pain. But will it work?

Manpreet decides to move away?

Manpreet and Charles remain united despite her voicing ideas she should move away.

Can Charles stop her?

Read more: How old is Mackenzie Boyd in Emmerdale? What is the REAL age gap between him and Charity?

Meanwhile Billy finds Dawn and is keen to make amends and he announces he wants them to marry as soon as possible.

Dawn posts a save the date on her social media. They are blissfully hopeful about their future; unaware somewhere in a park, Meena seethes at the sight of Dawn’s ‘save the date.’

She’s hellbent on getting revenge.