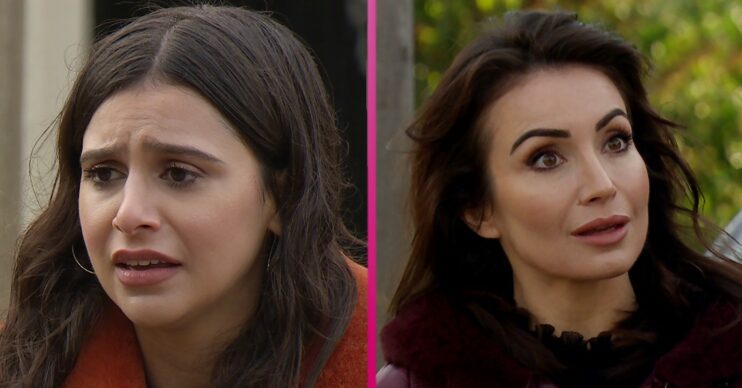 Meena continues to cause trouble

Emmerdale spoilers for tonight reveal that the drama with Meena continues.

Meanwhile Chas is determined to make Cain see sense and Vinny is upset that his romantic gesture didn’t go to plan.

This week, Billy and Dawn got married in front of their close friends and family.

After the wedding, Dawn got into a limo thinking it was a wedding surprise. However she was horrified to realise that Meena was driving.

Meena drove Billy and Dawn to a viaduct and told Billy he needed to choose to either save himself or Dawn. If he didn’t, she would kill them both.

Soon Leyla came looking for Billy and Dawn and saw that Meena had a gun.

Leyla tried to drive away but Meena shot her.

Later Dawn managed to regain the upperhand and began attacking Meena. When Dawn threatened to kill her, Meena said if she does, she won’t see her son Lucas again.

It was then revealed that Harriet was unconscious on the floor at home with blood coming from her head.

Tonight the drama continues. Has murdering Meena’s luck finally come to an end, or will she get away once again?

Read more: What happened to Roy Glover in Emmerdale?

Chas is determined to make Cain see sense as she gives him a lecture.

Can Vinny make it up to Liv?

Read more: Who did Susan Penhaligon play in Emmerdale? And is she married?

In last night’s episode (Tuesday, February 15) Vinny had a Valentine’s surprise for Liv.

He bought her a pair of earrings, but seeing the jewellery box, she thought he was proposing.

Tonight Liv rushes back off to work and Vinny’s left disappointed that his romantic gesture backfired so spectacularly.

Can he make it up to her?