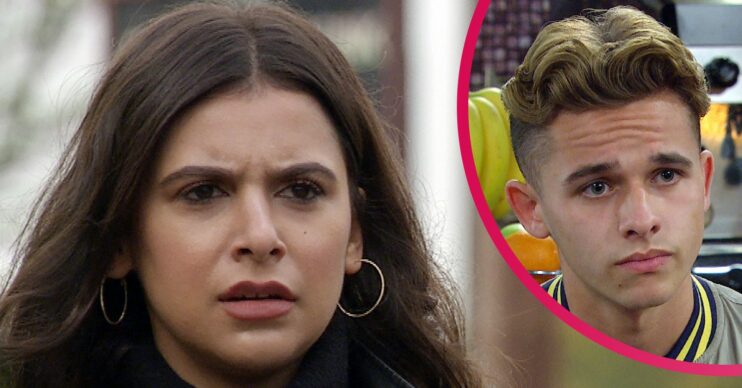 Emmerdale spoilers for tonight reveal Meena‘s bit box sticks up from the allotment, but will it be found?

Meanwhile Chloe hooks back up with Noah and Chas worries after not hearing from Aaron.

Last week, Liam found Meena at the barn where she was holding Manpreet and Vinny captive.

He knocked her unconscious and got Manpreet and Vinny out of the barn, but they told him that Meena was the one who killed his daughter Leanna last year.

Liam was enraged and chased after Meena who escaped. However she got away.

Furious about what he’d learnt, Liam destroyed the allotment he set up in Leanna’s name.

Tonight Leyla and Jacob survey the damage to the allotment after Liam destroyed it out of rage.

Unseen by either of them, Meena’s trinket box is just about visible as it sticks out of the earth.

Is Meena about to be caught out?

Chloe and Noah sneak around

Whilst Kerry is away Chloe hooks back up with Noah, but will they get caught?

Will Charity and Kerry put an end to it?

Jai takes a loan out in Laurel’s name?

Jai is still financially struggling from the fine given to the HOP over the Survival Challenge.

Tonight he applies for another loan but the application is soon rejected. Jai switches the name of the applicant to Laurel.

Read more: Emmerdale SPOILERS: Vinny and Liv to MARRY after she is freed from prison?

Meanwhile Chas reels from not hearing from Aaron. Is he okay?