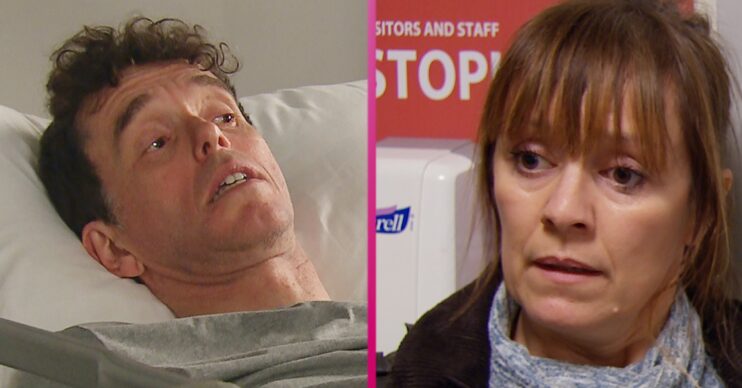 Marlon is taken back into hospital

Emmerdale spoilers for tonight (Tuesday, May 3 2022) reveal Marlon has another devastating health blow as he’s admitted to hospital again.

Meanwhile Noah begins to spy on Chloe using his new drone and Faith is determined to build bridges with Cain.

Emmerdale spoilers: Marlon is taken back to hospital

After her disastrous first day back at work Rhona is determined to have a better day but she’s a bit nervous about leaving Marlon home alone.

However when he’s there, Marlon’s cough begins to get worse and Liam suggests he drives him to the hospital.

Bear is mortified about how the day has turned out.

Later Rhona panics when Bear explains Liam has taken Marlon to hospital and she’s cross at her mother for allowing Marlon to go out.

In the hospital, Rhona is worried when she learns Marlon has developed aspiration pneumonia and is wearing a breathing mask as his coughing worsens.

It’s a worrying time and Marlon sees the concern in Rhona’s eyes that his condition is worse than she’s letting on.

Over the last week, Noah has started tracking Chloe’s phone and has been following her around the village.

However unbeknownst to her Chloe, Noah has bought a flashy new drone.

Is Chloe in danger?

Faith is determined to get back in Cain’s good books

Faith is desperate to build bridges with Cain and soon Chas suggests she uses Kyle as a way in.