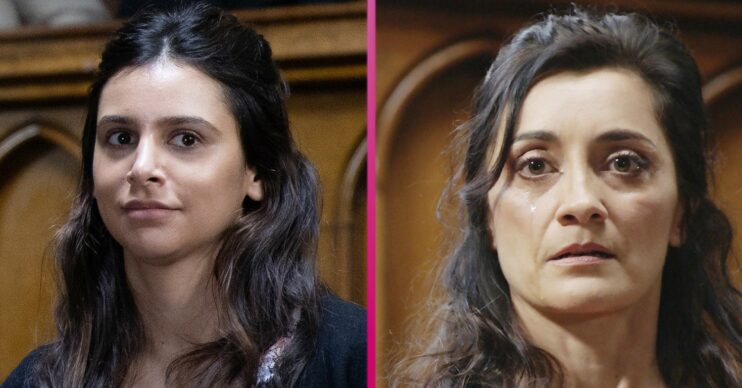 However things don’t go well for Manpreet in court and April pays Marlon a visit in hospital.

Read more: Joe Swash ‘so excited’ as he announces ‘family’ news ahead of wedding to Stacey Solomon

Manpreet is on trial for the murders of Emmerdale residents Leanna Cavanagh, Ben Tucker and Andrea Tate.

In last night’s episode (Monday, April 11) Liam stood up to testify in court. But the defence accused him of having an affair with Meena and blaming her for Leanna’s death when she broke things off with him.

Tonight Manpreet dreads the day ahead of her, but she’s determined to destroy her sister in court.

Meanwhile in prison, prison officer Ian is conflicted when he goes against is better instincts and flirts with Meena.

Once in court, Manpreet refuses to let Meena’s performance rattle her as she takes the stand to testify against her sister.

It’s a tough ordeal as the defence delves deep into Manpreet’s past and attempts to portray her as a liar.

Manpreet is infuriated to see her sister enjoying every moment.

Later Meena’s high spirits are dampened when she’s advised against taking the stand.

Eager to get into the limelight, Meena rejects this advice and excitedly prepares for tomorrow.

However when Rhona went to see Marlon, she begged to come with her.

Meanwhile Rhona is moved to tears to see how maturely April deals with Marlon’s vulnerability.