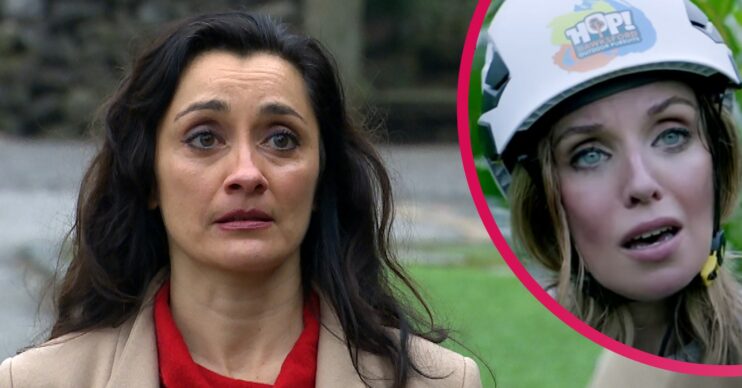 The police want to speak to Manpreet

Meanwhile Mandy finds out that Vinny and Liv are married.

Read more: Who plays Rhona’s mum Mary Goskirk in Emmerdale? Where have you seen Louise Jameson before?

In last night’s episode (Monday, March 7) Manpreet visited Meena in prison and told her she needed to confess to her crimes.

Meena told her sister she would also need to tell the police that she lied in her testimony to protect Liam.

However when Meena began to talk about how she should be grateful she got Andrea out of the way, Manpreet was disgusted and slapped her.

Afterwards it seemed like Meena was going to confess to her crimes, but she ended up telling police that Manpreet was the one who murdered Andrea.

Tonight the police take Manpreet in for questioning over Meena’s accusations. Manpreet feels like she will never escape the shadow cast by Meena’s actions.

Will Manpreet go down for a crime she didn’t commit?

Mandy finds out the truth

A few weeks ago, Liv and Vinny went off to get married in secret. When they returned they planned to tell Vinny’s mum, Mandy, but when she saw the rings she assumed they were engaged.

She began trying to plan an engagement party as Vinny and Liv tried to find a way to tell her the truth.

Noah’s plans has the desired effect as Mandy is floored by the reveal.

When Vinny arrives, a devastated Mandy shows him the marriage certificate and asks for an explanation.

Vinny is left feeling guilt-ridden when Mandy explains that she sees his secret wedding as a betrayal of their relationship. Will Mandy ever be able to forgive Vinny?

Emmerdale airs weeknights at 7.30pm on ITV with an hour episode on Thursdays.