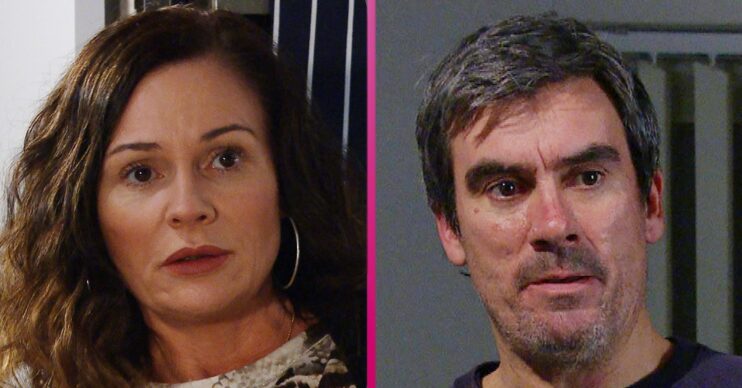 Cain and Mack meet up with Gavin

Emmerdale spoilers for tonight reveal Chas is furious with her brother Cain after he meddles in the Woolpack deal.

Meanwhile Kim opens up to Will and Charity puts her foot in it with Vanessa.

Al offers to give Kerry and Kyle a lift into town. Soon, Cain is thrown to spot them all approaching the leaking car. Can he stop them before the go?

Meanwhile Kerry is chuffed when Al asks her out on a date.

Mackenzie finally breaks into Al’s phone and they read through the messages from Gavin and hatch a plan to get answers.

Before long Cain and Mackenzie are meeting Gavin.

In the village, just before signing, Chas asks Al to promise once everything is signed; he’ll end his feud with Cain. Al agrees.

Before long, Gavin tells Al about his run-in with Cain and Mack and how he’s pulling out of the development deal.

Al pleads with Gavin but he refuses to change his mind and demands his money back.

When Gavin threatens Al and his family if he fails, Al is terrified.

As the deal falls through, Chas is furious that Cain has ruined everything. Will they ever be able to fix things?

Read more: Who was Dave Glover in Emmerdale? Where is actor Ian Kelsey now?

After a misunderstanding with Bernice, Kim opens up to Will.

Charity puts her foot in it with Vanessa

Read more: Emmerdale: How many people has Meena killed and who will she kill next?

Johnny asks Charity for a playdate with Moses, but Charity ends up sticking her foot in it with Vanessa.

Will they ever be able to sort things out?