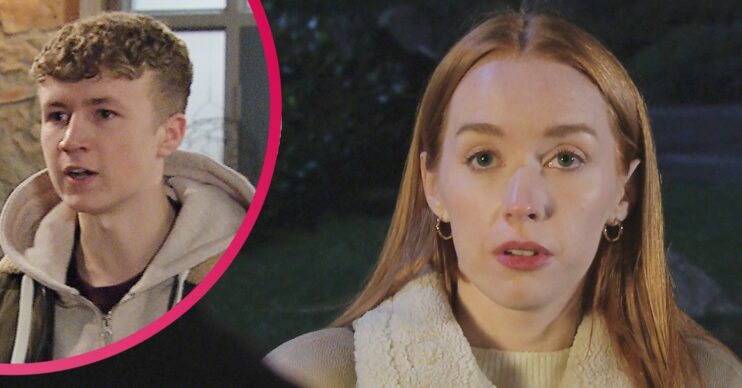 Jacob doesn't want to be on his own

Emmerdale spoilers for tonight reveal Chloe and Jacob spend the night together.

Meanwhile Liv feels guilty about the secret wedding plans and Chas isn’t keen on Charity’s ideas for the pub.

Last year, Chloe and Noah began secretly dating but were kept apart by their families.

Although Chloe has now been cut off from her dad, Kerry has been worried about her getting close to Noah.

But it looks like Chloe may have her sights set on Jacob.

Tonight Jacob asks Chloe to spend the night with him, not wanting to be alone. She agrees to stay with him, but what will Noah say?

Last week, Liv and Vinny got engaged and made the decision to elope instead of planning a huge wedding.

The only person who knows of their plan is Laurel, but they want to keep their wedding a secret.

In last night’s episode (Monday, February 21) Vinny told her that he has a friend of a friend in Daventry who’s a registrar and is willing to bend the rules slightly.

As their wedding bands arrive, Liv and Vinny are excited but conceal their doubts from each other about not telling their family.

Charity bites her tongue as Chas ridicules her new ideas for the Woolpack.

Meanwhile Marlon is left frustrated when Charity and Mack aren’t sold on his new menu plans.

Bob helps Marlon out by offering up the cafe in the evenings for him to try his pop-up nights.

From March, Emmerdale will be moving to 7.30pm Monday to Fridays.