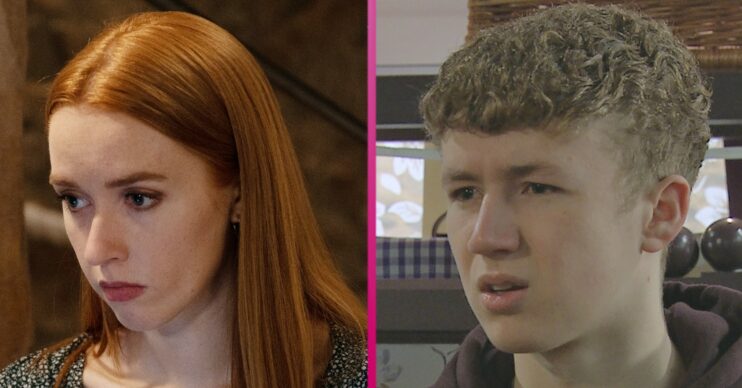 Noah gets Chloe back to his house

Meanwhile Gabby fears Jamie is back to take Thomas, and Al and Cain’s feud escalates.

Jacob’s frustrated that no one seems to believe him when he says he didn’t break into Chloe’s room and steal her journal.

Victoria finally decides to hear him out and he tells her how he suspects Noah was the one who took Chloe’s journal and keys.

Meanwhile an unsuspecting Chloe agrees to spend the day with Noah hanging out at his house.

She’s secretly still upset about Nate so is happy to be spending time with attentive Noah.

All is great and Chloe is amazed that Noah seems to know what music she likes.

However things soon take a turn when she suddenly finds her lost keys. She hides her fears and decides to confront him.

Noah manages to lie his way out of it and Chloe is privately panicked.

Before long she sends Noah out to the shop to get some snacks.

Soon the scales fall from her eyes, astonished her fears are confirmed when she sees the extent of evidence before her.

It becomes clear Noah has been stalking her for weeks.

Gabby fears Jamie is back to take Thomas

When Billy and Dawn admit to Gabby that there was a hooded person on CCTV, Gabby’s terror mounts, knowing she’s going to be home alone all day.

Despite Dawn doing her best to reassure her, Gabby explains her instincts are telling her Jamie is going to come back and try to take Thomas and it’s not a matter of if, but when.

Gabby makes it her mission to keep a watchful eye on the property.

Before long she’s found a dropped torch outside. She panics when she sees a hooded figure looming in the woods. But is it Jamie?

Al is annoyed when Cain returns his car.

After finding the cable tie securing the drive shaft in the engine, he guesses Cain has further sabotaged the car so tells Cain to prove it’s safe by driving the car.

Cain agrees and takes the car out.

He roars at speed down Main Street straight towards Al.

Neither man looks set to budge as Al holds his nerve standing in front of the speeding vehicle.

Cain screeches to a halt just in time.

Faith tries to make things up with Cain but he ends up unleashing a torrent of abuse at her.

Even Chas is fed up and tells her mother to get lost.

Will Faith ever be able to sort things out with her children?