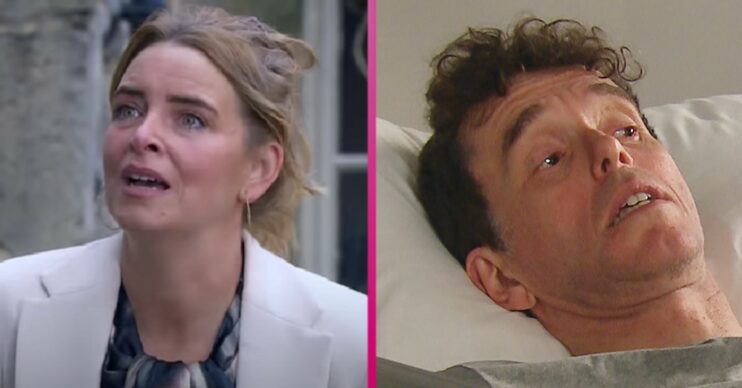 Charity's news leaves Rhona and Marlon in a difficult situation

Meanwhile Kim is fed up with Jai and Laurel’s bickering and Ethan is daunted over Jordan’s case.

Rhona jumps back into work at the vets when Dawn needs help with an injured dog.

Meanwhile Charity pays a visit to Marlon but she brings bad news.

She tells him he’ll have to go onto statutory sick pay, leaving Marlon worried about the family finances.

Rhona suggests she could start back at work part time to bring in some more money. But what does Marlon think?

Jai and Laurel lose their jobs?

Elsewhere Jai manages to keep his job at the Hide after everything that’s happened with Kim.

But soon Jai and Laurel’s bickering behind the counter causes Kim to put both of their jobs on the line.

Ethan is left with a difficult decision to make

In last night’s episode (Thursday, April 28) solicitor Ethan was called to the police station to represent a man named Jordan who had been arrested for assault.

Jordan claimed he acted in self defence but Ethan was shocked to learn Jordan’s victim was his neighbour Billy Fletcher.

At the hospital, Billy told Dawn that the attack was racially aggravated.

Meanwhile Ethan revealed although he knows Billy, there’s no conflict of interest.

He later suggested to Jordan he may prefer to seek alternative legal representation but Jordan was adamant he wanted Ethan to be his legal counsel.

Ethan ended up running into Harriet who encouraged him to withdraw from the case, warning how difficult the case will make his personal relationships.

What will Ethan decide to do?