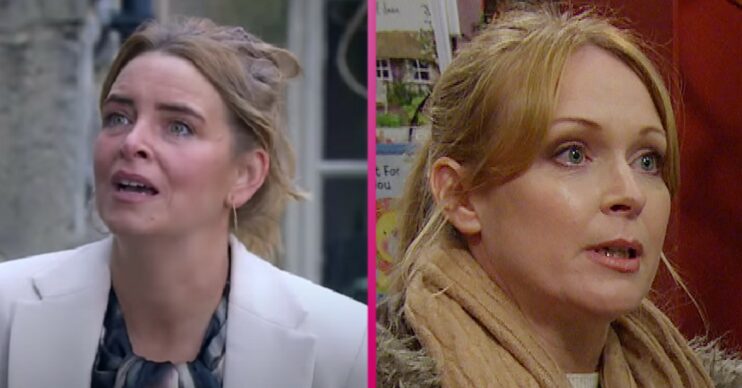 Mack and Charity broke up

Emmerdale spoilers for tonight (Tuesday, March 15) reveal Vanessa and Charity struggle to keep their eyes off each other.

Read more: Emmerdale: Has Mack left the village for good? Will he return?

In last night’s episode (Monday, March 14) Mack left the village to go back to Scotland, furious that Charity didn’t want him to move in with her.

However viewers know Charity has been keeping him at a distance as it’s clear she still has feelings for her ex-girlfriend Vanessa.

Tonight Paddy detects tension between Vanessa and Charity as the pair struggle to keep their eyes off each other.

Could they get back together, or is Vanessa still set that it will never happen?

After Dawn sent Alex a text to start the process of Billy adopting her son Lucas, Dawn hears no response.

Tonight Dawn and Billy decide to drive to Alex’s house and nervously approach the subject of Billy adopting Lucas.

Initially Alex is enraged by the idea but eventually he accepts Billy and Dawn’s proposal.

However it is later revealed that it’s not going to be that straightforward.

Alex ominously appears out of the dark and pulls up outside Woodbine.

Dawn secretly meets him outside and Alex demands that she deal drugs in order to pay off his debts in return for his consent to Lucas’ adoption.

What will Dawn do?

Samson’s crush on Amelia deepens. As the drinks flow at a party hosted by Cathy, Noah starts his plan to use Amelia to make Chloe jealous and enlists Samson to keep Cathy busy while he does so.

However Samson is disapproving of Noah’s plans.

But it’s not long before the truth about what Noah is up to comes out and poor Amelia is left heartbroken.