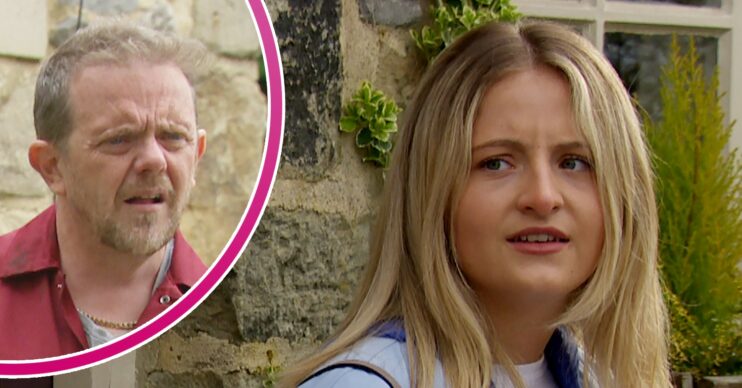 Gabby and Kim make a discovery about Amelia

Meanwhile Mandy suspects that Sandra may be behind the missing tips in the village salon, and Jai struggles seeing Laurel and Kit together.

Last week Amelia found out she’s pregnant. The teenager is also facing the wrath of Gabby Thomas after she fainted while holding Gabby’s baby, Thomas.

Last week Gabby made it clear she wanted Amelia and Dan out of their home and set out to kick them out. But Amelia has remained quiet about her pregnancy.

Tonight Dan confronts Kim over the ‘To Let’ sign outside of his house.

Kim lies acting like she knows about the situation.

But Kim goes to speak to Gabby and insists Dan and Amelia should have two months’ notice. She’s annoyed with her for not keeping her in the loop.

Gabby and Kim march Amelia home and tell Dan how his daughter has been impersonating Gabby in order to visit Noah.

Later Dan is relieved when Harriet invites and Amelia to live at Woodbine.

Mandy is suspicious of Sandra

Mandy is keeping her eye on Sandra, concerned that money is missing from the tip jar and soon is voicing her concerns to Liv.

Meanwhile in the salon, Sandra listens in as Rishi explains he’s had an unexpected windfall.

Later Sandra starts to sense Mandy is onto her and makes a show of putting Rishi’s tip money in the jar.

Mandy secretly takes out her CCTV camera kit, determined to find out why the tips have been missing.

Later Rishi is amazing that his new dating profile got a response from a lady.

But he has no idea that it’s really Sandra behind the profile and she’s planning to try and reel him in.

Is he getting jealous?