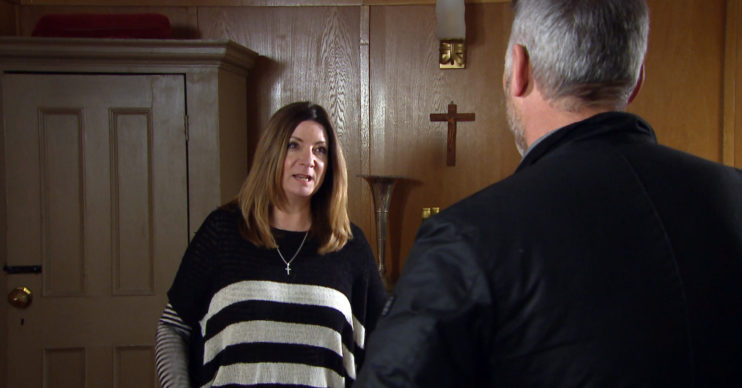 There's more to their past than we know

Emmerdale will reveal the real history between vicar Harriet Finch and dodgy DI Malone tonight – and it’s set to be explosive.

Viewers have long since suspected there’s more to their relationship than just ex-work colleagues, and it looks like they were right!

Harriet has had no idea what’s been going on with Malone and her other half Will behind her back, but when Cain Dingle told her everything she was fuming.

Will, Cain and Billy have been working for Malone on drugs deals. Although they were only doing it under threats and blackmail, Harriet still wasn’t impressed.

With Will lying in hospital having been badly beaten courtesy of Malone’s heavies, Harriet finished with him, telling him she didn’t ever want to see him again.

How do Harriet and Malone know each other in Emmerdale?

Malone comes to see Harriet at the church tonight (Friday, May 15) and it soon becomes clear they know each other very well indeed.

He drops a bombshell that will leave Harriet reeling and unsure what to say next.

But by Monday (May 18) it seems old feelings die hard as Harriet and Malone continue to argue, but the chemistry is sizzling.

Seeing she’s angry he offers to leave, but it’s clear he doesn’t actually go because when Dawn arrives at the church later, we see Malone buttoning up his shirt.

Dawn is non-the-wiser, but Harriet is soon telling Malone they were mistake and it can’t happen again. But does she really mean it?

Wracked with guilt and full of self-loathing, Harriet doesn’t know what to do when Malone texts asking her to meet again – and she doesn’t immediately say no…

Will wants to win Harriet back

Meanwhile, Will is hopeful he can win Harriet back – if only he knew!

Billy offers Will some advice on women and Will comes up with a plan. However, there’s every chance Billy isn’t the best person to ask and this could go badly.

Is Will about to make everything worse with Harriet? Or will her guilt over Malone mean she forgives Will whatever he does?

Emmerdale is on tonight at 7pm on ITV.