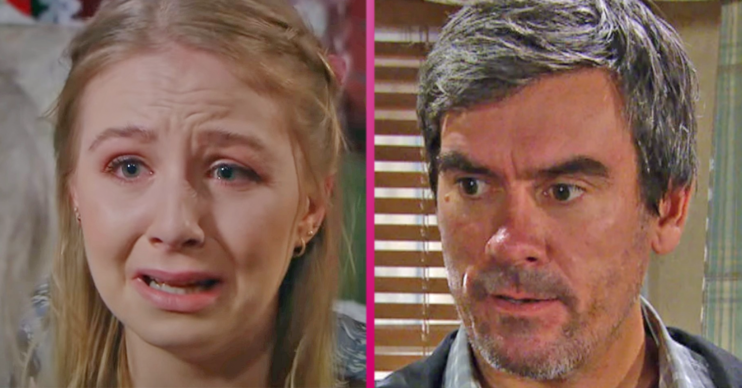 Emmerdale SPOILERS: The Dingles disown Belle as Cain finds out about Jamie?

Emmerdale spoilers reveal Cain isn’t happy when finds out Belle and Jamie are back together. Are the Dingles going to disown her?

Currently Belle is keeping Jamie’s secret – that he was the one responsible for Moira’s hit and run. However her nephew Nate recently found out the truth.

In the upcoming scenes from the soap, Cain returns from his trip and darkens upon discovering Belle and Jamie are back together. He demands to know from his sister why she is back with a Tate, but she struggles to hide her guilt.

Meanwhile Jamie’s concerned when he finds out Belle is helping Moira out at Butler’s farm. Seeing an opportunity, Belle agrees to steer clear of Moira if Jamie convinces Kim to send a client’s business to Butlers.

But later Moira receives a call from the police. They tell her they’ve found a new witness to her hit and run. Who could the witness be?

Moira’s ashen as the reality of the incident comes flooding back to her. Is she going to be okay?

Later Nate lashes out and smashes Jamie’s car wing mirror. Has he landed himself in trouble with his boss?

Meanwhile, Belle defends Jamie in front of Cain. However there’s a sense that something has been broken between herself and the Dingles.

But things get even more awkward between the Tates and Dingles later when Jamie overhears Sam bad-mouthing him. Furious, he decides to fire him.

Sam looks to Belle for support but is shocked when she sides with Jamie.

Later Belle arrives back at the Dingle’s to collect her things after confessing to Zak that she’s moving in with Jamie. Is she making the right decision?

Is her bond with the Dingles broken forever?

Do you think Jamie and Belle should be together? Leave us a comment on our Facebook page @EntertainmentDailyFix and let us know what you think of this story.