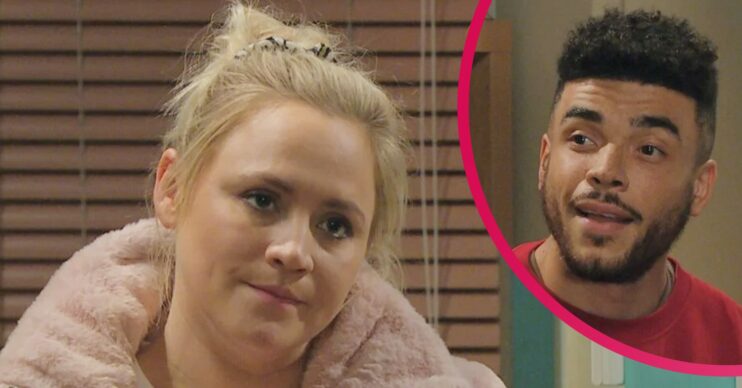 Could Tracy Metcalfe be on her way back to Emmerdale with baby Frankie? Emmerdale spoilers suggest she could well be.

Next week fans will see Frankie’s dad, Nate Robinson, gutted as he watches old videos of his little girl.

It’s obvious that he’s devastated to be missing out on spending time with Frankie.

Trying to take his mind off of missing his baby daughter,  Nate tries to rope Ryan into a drinking session.

But is this really the best way to stop him thinking about his daughter?

Or should he go and find Tracy and Frankie and bring them back to the village?

Emmerdale fans will remember that Tracy and Nate were due to get married .

But Tracy – played by Amy Walsh – struggled with post-natal depression after having Frankie.

On a night out, Nate cheated on her, putting their relationship under further pressure.

Despite trying to win Tracy back, she left for a new job in Nottingham, taking Frankie with her, leaving Nate devastated.

Of course, in real life, actress Amy is on maternity leave.

She recently gave birth to her first baby with Toby Alexander Smith, who plays Gray Atkins in EastEnders.

Their little girl, named Bonnie, was born earlier this year.

Speaking to OK! magazine at the time, Amy said: “Whenever we hypothetically talked about our family, we always said ‘our little Bonnie.’ When she came she couldn’t have been more of a Bonnie.”

Toby added: “My parents had two King Charles spaniels and one was called Bonnie – but that had no part in it.”

Amy went on to reveal the baby’s super cute middle name: “Her middle name is Mae.

“We wanted something one syllable that went with her first name and surname Smith.”