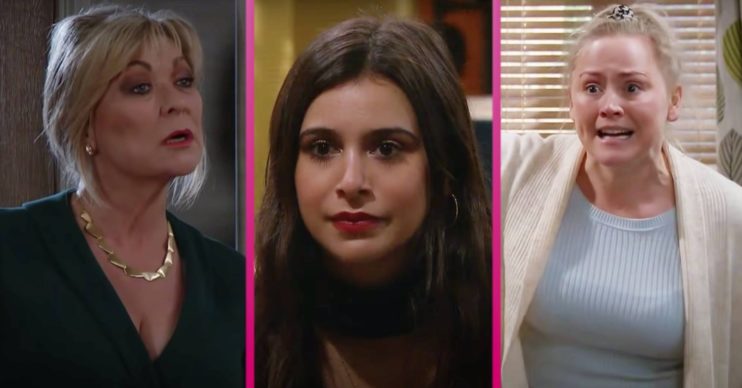 Emmerdale spoilers suggest the ITV soap is in for a summer to remember.

And the show’s boss reckons fans will experience the full gamut of emotions watching the soap‘s biggest storylines unfold.

Speaking to ED!, as well as other news outlets, producer Kate Brooks promised six of Emmerdale’s main plots will bring ‘joy, colour and heartbreak’ to viewers throughout June. Beware of the spoilers below!

Emmerdale spoilers: What can viewers expect this summer?

Schedule changes linked to the delayed Euro 2020 means episodes will be available on ITV Hub ahead of airing on TV.

From June 14, the episodes airing that week on Emmerdale and Corrie will be ready to watch from Monday.

Furthermore, the soap’s upcoming plots should make ‘boxset-viewing’ all the more attractive.

Kate told reporters that plots will also feature some of Emmerdale’s strongest female characters most prominently during the same period.

The return of Faith’s cancer?

Described as being full of “chaos and mischief” by Kate, Faith worries her cancer may have returned.

However, will she face her troubles or try and ignore them?

According to Kate: “Everything comes into sharp focus. Faith looks to her family, but will she tell her kids the truth?

“Or will her lies leave a trail of destruction in her wake?”

Kate promised the storyline would be “heavy” but packed with “fun moments”.

Will Kim find herself in danger?

Reflecting on how Kim is finding herself a victim, Kate said: “Kim is not always known for her vulnerability.

“But she is seen her doubting herself and those she loves most.”

Kate also said Kim will “stop at nothing to catch the culprit” behind her torment. But she also teased Kim could be the architect of her own downfall and “pay the ultimate price”.

Overall the show boss said this storyline will be “brilliant escapism at its best”.

Read more: Emmerdale: Bernice branded ‘desperate’ and ‘selfish’ by viewers as she tries to win Liam back

Kate noted Tracy’s storyline about post-natal depression will be “heartbreaking but very real”.

She vowed it would “show the truth” of the condition which affects one in every 10 women in the first 12 months of being a mum.

Kate also said writers had worked very closely with the APNI (The Association For Post Natal Illness) charity to ensure it is “raw and honest”.

She added it will be “hard to watch at times but it is a story about love and hope”, and hopefully “it will also offer comfort”.

According to Kate, Meena “will do anything and everything to get what she wants”.

But just how far does that mean she will go after Jacob intrudes on her plans to move in with David?

“This will be a gripping and enthralling storyline that will leave viewers on edge of seat and shouting at the TV,” Kate said.

She also described it as a “whirlwind” that will “get the nation talking”.

Who will live happily ever after?

Shenanigans are expected for Leyla and Liam’s wedding day now that Bernice is back on the scene.

Kate described this storyline as the two women ‘wrestling’ for the doctor’s heart. But she also promised it will be “joyous and fun-packed”.

Kate added: “Will it be happy ever after or will Leyla’s plans be scuppered?”

Kate is clearly ecstatic about The Vivienne of RuPaul’s Drag Race UK coming to Emmerdale for a special guest appearance.

She didn’t give away too many Emmerdale spoilers about it but reasoned: “People have had a really tough time lately so we wanted to bring joy and colour to the village with Emmerdale’s first Pride event.”

Kate added it will be “bursting with celebration and the most fabulous guest appearance”.

She concluded: “It will be Emmerdale at its vibrant best. And not just a riot of colour but an important episode about tolerance, too.”