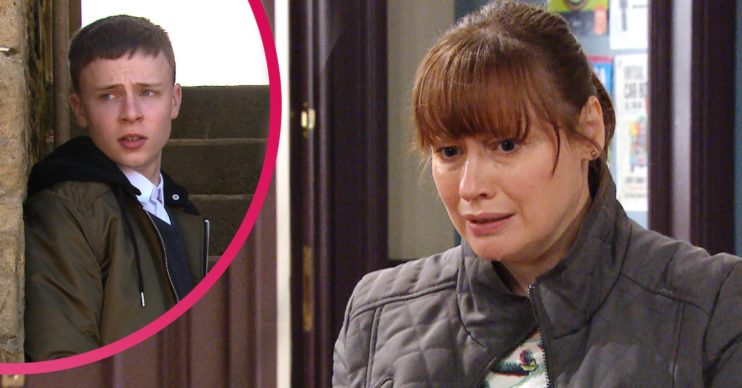 Lydia finds some hateful comments about her online

Emmerdale spoilers reveal Lydia is mugged by a group of lads. But it looks like Samson could land himself in trouble when he goes after violent revenge.

Recently Lydia was arrested under suspicion of running a fake pension scheme.

In next week’s scenes Lydia sees what has been posted about her online, despite Sam and Samson trying to stop her from reading it.

Lydia is heartbroken by what’s been said.

The next day, a brick is thrown through their window and protective Samson is worried about leaving Lydia on her own.

He urges her to call the police about the harassment, but Sam wants to settle things the Dingle way.

Lydia won’t condone any violence and assures Sam that she can manage a solo trip to the police station to report the harassment.

When she leaves Wishing Well Cottage, Lydia is robbed by a pair of lads out for revenge about the pension scam.

Samson happens upon Lydia’s mugging but he doesn’t intervene. But it becomes clear that Samson recognises the boys.

When Sam turns up, he chases the lads off and Samson is upset that he didn’t step in to help his stepmother.

Back inside the house Sam is furious over what happened to Lydia and is puzzled as to why Samson doesn’t want revenge.

But the teenager is caught between Sam’s desire for violent revenge and Lydia’s hope for no more trouble.

When Sam takes Lydia to the police station to make a report, Samson puts a crowbar in his school bag.

He wants payback for what happened to Lydia. But is he going to end up getting himself in trouble?