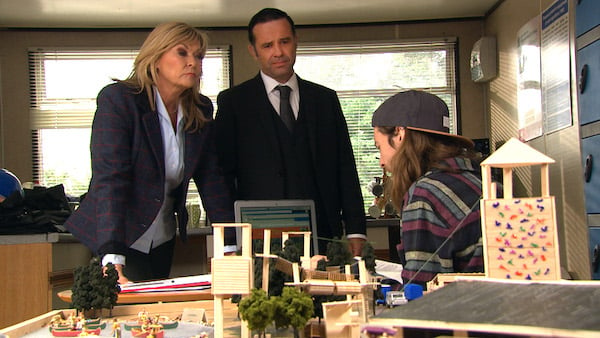 It looks like Ryan Stocks could be in danger when he makes an enemy of Kim Tate in next week’s Emmerdale.

Recently Kim and newcomer Al Chapman have been planning to launch an outdoor pursuits centre on the grounds where the Sharma & Sharma factory once was.

With plans underway, they wanted to open the centre soon, however it looks like Ryan could get in the way.

Unimpressed with the lack of disabled facilities included in their vision, Ryan threatens to go to the press.

Knowing her plan could come crumbling down around her, Kim tells Graham that they need to get Ryan onside no matter what it takes.

But how far is she willing to go?

Ryan isn’t one to back down, so if she can’t get him onside, will she take him out instead?

Fans of the soap know Kim ordered for her step-grandson Joe Tate to be killed.

Henchman Graham Foster thought Cain had done the job for him when the Dingle dad punched Joe and thought he was dead.

When Graham then went to dispose of Joe’s body, he noticed Joe’s hand was twitching and for months, viewers had no idea if he was still alive.

However, it was revealed earlier this year that Joe was alive and living abroad.

Could the same fate befall Ryan?

Charity had been thrown out of her home by her father Obadiah after she fell pregnant the first time.

She gave birth to a daughter, Debbie, who was given to Obadiah’s friend, Pat, to raise.

Charity had Ryan in hospital, however she thought her son had died and she ran off, blaming herself for drinking vodka whilst pregnant in order to stop her pregnancy.

However, Ryan survived and was adopted by the midwife, Irene Stocks, who raised him.

Ryan now spends time in the village frequently visiting his mum and relatives.