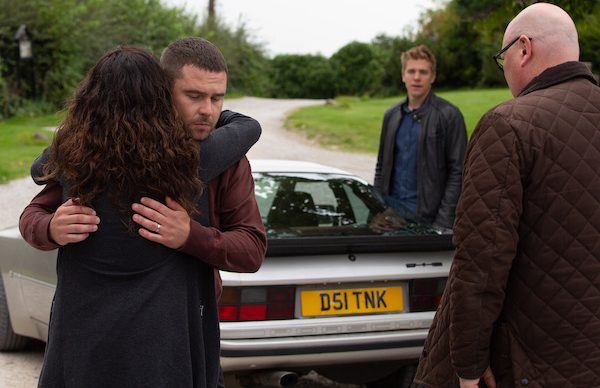 Emmerdale SPOILERS: Robert and Aaron go on the run

Can they leave before the police catch up with them?

Robert Sudgen and Aaron Dingle make the shock decision to go on the run in next week’s Emmerdale, but will they get away from the village before the police catch up with them?

With Robert facing life in jail for attacking Victoria’s rapist, Lee Posner, the future is already looking pretty bleak for him and husband Aaron.

But next week sees Robert and Aaron’s lives change forever when Victoria arrives and tells them that Lee has died from his injuries inflicted by Robert.

The pair are left reeling, realising that instead of manslaughter with intent, Robert could now be charged with Lee’s murder.

But while he might have only been defending his sister’s honour when he attacked Lee, everyone knows the jury won’t see it that way and, as the realisation of what this all means dawns on Robert, his world starts to slowly unravel.

However, Liv has got a plan.

She suggests to Aaron and Robert that they go on the run, getting away from the police before they can lock Robert up and throw away the key… but will her idea really work?

With Aaron and Robert facing spending the rest of their lives apart, the pair don’t take long to be convinced and with the decision to run away from Emmerdale made, the couple are hit with the realisation that either way, their lives are about to change for good.

At the village hall Aaron tells his devastated mum what he and Robert are planning.

As Chas tries to talk him through his decision, Aaron is left an emotional wreck by the time he leaves.

Robert also has some sad goodbyes of his own to say, and after he bids farewell to everyone he loves, the pair make a gut-wrenching departure from the village.

But as they drive off to start their new adventure, will they make it away from the village without the authorities finding out what is happening?

Later in the week Lee’s mum Wendy turns up desperate to see Victoria… but why does she want to see the woman her son abused?

Does she know about Robert going on the run, or is she in the village for something else entirely?

Do you think running away is the right thing for Aaron and Robert? Leave us a comment on our Facebook page @EntertainmentDailyFix and let us know what you think!